Everything you need to know about Haiti including background, food culture, the history, and popular recipes to make. 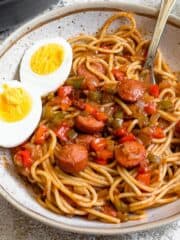 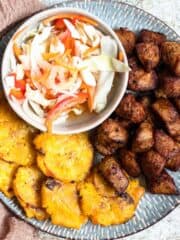 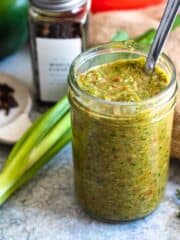 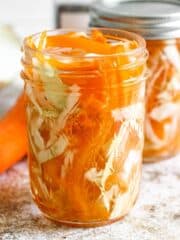 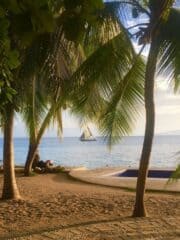 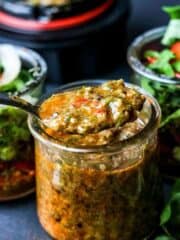 Haitian Food: Everything you Need to Know

When Christopher Columbus stumbled upon the land that is now Haiti, he found the island full of Taino Arawak people.

They called their land Ayiti, which means “Land of Mountains”. Over time and through differing occupations, this became “Haiti”.

Haiti shares a small island called Hispaniola with the Dominican Republic. The island sits between the Atlantic Ocean and the Caribbean Sea. Haiti has the western third of the land, while the Dominican Republic has control of the eastern part. The country is also close to Cuba, Jamaica, and Puerto Rico.

The country itself is made up of a collection of islands, including Gonȃve Island, Vache Island, Tortuga Island, and more.

The majority of Haiti is covered in mountains (see above for the reason behind its name), including the Massif du Nord, the Massif de la Selle, and the Matheux Mountains. There are also shallow rivers and lakes.

Haiti was home to the Taino Arawak people far before ever being “discovered” by European explorers. Christopher Columbus sailed an expedition in 1492, leading him to the island of Hispaniola, which now holds both the Dominican Republic and Haiti.

By the 1650s, France had control of the land, naming it Saint-Domingue. They used it to produce coffee and sugar, and brought slaves to work the land. The slaves were not treated well, and many of them died.

In the 1790s, many slaves in Haiti revolted against France, causing the French to end slavery in the colony. This didn’t last long, however, and Napoleón Bonaparte quickly set out to reestablish slavery in 1801.

The slaves of Haiti were not going down without a fight. They revolted again and officially declared their independence from France on January 1,1804.

Being only the second independent nation in the Western Hemisphere was not easy on Haiti. Other countries refused to trade with them, as they did not approve of the revolts. Many of the citizens had died in the war, which also killed a lot of the fields and plantations that the Haitians had worked.

Haiti could not decide on a leader, which resulted in a short civil war and then a period of time in which two regions of the country were ruled separately. In 1820, the north and south were reunited and Jean-Pierre Boyer ruled the country.

He succeeded in invading Santo Domingo and took over the entire island of Hispaniola. However, by 1844 “Spanish Haiti” declared its independence and named itself the Dominican Republic.

During World War 1, the United States invaded Haiti so as to gain control of the Panama Canal before Germany. This was a turbulent and unhappy time in Haiti. Finally, the US withdrew in 1934. After this, more years of turbulent reign brought brutality and fear to the country.

In 1987 a new constitution was introduced to Haiti, establishing spots for a Prime Minister, a President, and a two-chamber legislature.

In 2010, a massive earthquake hit Haiti, killing 316,000 people and injuring 300,000 more. The world came to Haiti’s aid, sending money and rescue missions. The country is still recovering from this tragedy.

The national languages of the country are French and Creole, and while most of the population speaks Creole, only about 10% of the population speaks French. The language demonstrates a division between the working class and upper class of the country, with most upper class citizens speaking French and working class speaking Creole.

Most of the country is working class, with about 80% of people being poor. In 2008, hunger riots broke out across the country, with Haitians desperate for a change in their living conditions.

As for religion, 80% of Haitians are Roman Catholic, 16% are Protestant, 3% practice varying religions, and only 1% of the population practices no religion.

In addition to the religions listed above about 50% of the population also practices Vodou, a religion based on spirits, called Iwa, that communicate with humans.

Vodou impacts Haitian culture quite a bit, with dances coming from Vodou traditions. Drums are majorly important to Haitian music, with a rada being the set of three drums used in Vodou ceremonies.

Haitian food has been influenced by the many countries that have impacted its history, including African, French, and Spanish influences.