For delicious recipes from Dominica, visit the linked recipes under “On the Menu” below. 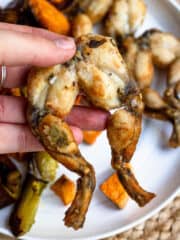 The flag is green, representing the forests and vegetation of the country.

It is split with a tricolored cross of yellow, black and white. The cross stands for the Holy Trinity and Christianity.

Yellow signifies sunshine, citrus and bananas (large exports for Dominica), and the Kalinago tribe, a local tribe of Indigenous Caribs.

The black stripes stand for the rich soil of the country as well as the African heritage of the people.

Finally, the white stripe represents the many forms of water in the country, including rivers, creeks, and waterfalls.

In addition to its literal representation, the parrot also signifies the country’s aspirations to fly to great heights.

The red circle represents Dominica’s commitment to social justice, and the 10 stars stand for the 10 parishes of the island. The stars also stand for hope.

Dominica is one of the only countries in the world to feature purple on their flag!

Dominica is located in the Lesser Antilles region between North and South America. It is divided into 10 parishes, or subcategories. The capital of the country is Roseau.

Unlike most of the Caribbean countries that we’ve learned about, Dominica is a single-island nation, meaning that it does not have many smaller islands associated with the country.

These volcanoes lead to many hot springs and thermal pools. Dominica is home to the second largest hot spring, Boiling Lake (the first largest is Frying Pan Lake in New Zealand).

The Kalinago are an indigenous tribe in the country, and were the original Dominicans. The population was once reduced down to about 500 Kalinago, but they have grown and are now the largest group of native Caribs anywhere in the world at about 3,000.

The Kalinago gave Dominica its first name, Wait’tukubuli, which translates to “Tall is her body.”

The Kalinago Territory is a 3,700 acre district set aside in Dominica for the Kalinago tribe to live. This is where they build their homes, their lives, and their community.

English is the official language of the country, but the Kalinago speak Kwéyol, a rendition of Antillean Creole.

Dominican food has Creole roots and technique and features a lot of local flavor. The national dish was Mountain Chicken, until the population of frogs (the main ingredient of the dish) rapidly declined around the year 2000.

Lunch is the most important meal of the day to most Dominicans, and many stop their busy lives to sit down for a full meal.

People in Dominica very frequently eat some popular food items that we’ve made for other Caribbean countries, including Bakes, Hibiscus Tea, and Macaroni and Cheese.

Fresh fruits and vegetables are the most prominent features of Dominican cuisine, including plantains, bananas, and oranges.