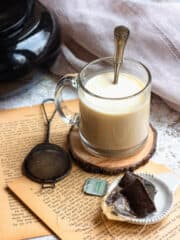 How to Make Butter Tea from Bhutan 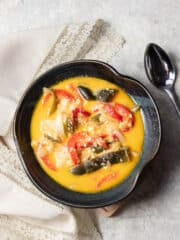 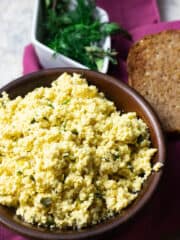 I’m not gonna lie to ya… Bhutan is a DOPE country. It’s pretty badass actually. It has the most dangerous airport in the world; the Bhutanese used to be cannibals; they shoot arrows long distances as a form of entertainment. For any person, Bhutan might be considered a little intimidating.

It’s also known as one of the happiest countries in the entire world!! This is, perhaps, partially due to the fact that Bhutan HEAVILY celebrates (worships, even??) the phallus. HEHE. Yep… The penis. They love it there. Though, of course, there’s more to contribute to Bhutan’s happiness than this. The Bhutanese focus very heavily on happiness. They even measure their country’s success in GDH, or Gross Domestic Happiness.

After eating the food of Bhutan, I can see why happiness levels are so high there. The food is hearty, stick to your bones food. They love butter in Bhutan, but above all else, they LOOOVE chilis. Between the heat of the chilis, the fat of yak cheese, and the smoothness of Butter Tea, its impossible to ever be cold in Bhutan… even if it IS located in the Himalayas (on second thought, Bhutan’s location is most likely why they love these ingredients).

I can’t wait for you to try the recipes of Bhutan! The Gondo Datschi was my favorite from the two weeks, but the Ema Datschi and the Butter Tea are a close second. Throw the Cucumber Salad in there too. No reason to leave that deliciousness out. Honestly, Bhutan can’t go wrong.

As always, let me know what you think of the recipes! I can’t wait to hear your opinions.

Religion and Culture in Bhutan

There is a culture law in Bhutan that mandates specific clothing, holidays, celebrations etc so that the Bhutanese do not forget their cultural background. Over 100,000 Nepalese people were exiled from Bhutan for not adhering to these laws.

Most of the country follows Buddhism. English is taught in schools.

Bhutan is in the northern Himalayas. It can be quite difficult to get to; in fact, its international airport is one of the most dangerous in the world.

Foreigners are allowed to visit Bhutan, but they have to pay a national tax of $250 per day. This fee covers the cost of your hotel and a tour guide, and it also contributes money to the Bhutanese school system.

Ema datschi, a soup mixture made of hot peppers and cheese, is the dish of the nation. Common cheese types in ema datschi include yak cheese and farmer’s cheese. The Bhutanese eat ema datschi at almost every meal. Most of the recipes in Bhutan contain chilis in some form. It is said that the Bhutanese love chilis so much that they become an ingredient instead of a condiment in their meals.

With such a strong love of chilis, the Bhutanese must become accustomed to spicy food at a young age. They train their children to enjoy spicy food by introducing small amounts of spice when they are young and increasing the amount of spiciness as they get older.

Other popular foods include Momo, or dumplings stuffed with chilis, cheese or meat. Popular vegetables are spinach, turnips, and pumpkins and the most common grain is red rice. Red rice is similar to brown rice, but the color is just red!

Traditionally, the Bhutanese eat with their hands. In order to clean their hands before eating, they form a small piece of rice into a ball and run it over their hands. They say that this stickiness of the rice removes the germs from their hands.

As a Buddhist nation, a strict ban on killing exists in Bhutan…. Even if the killing is for eating. Any meat eaten in the country of Bhutan actually comes from India.