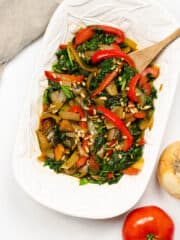 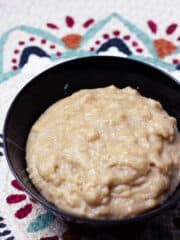 How to Make Pap from Botswana 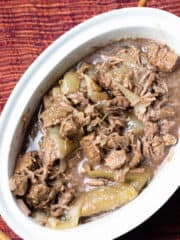 Beef in a Slow Cooker (Seswaa) from Botswana

The flag of Botswana is a blue background with white and black stripes running through the middle. The blue on the flag represents water, because water is such an important element to the life and survival of the Batswana. The black and white that runs through the flag symbolizes two separate meanings. The first is the ability for many races to live together in harmony in Botswana. The black and white stripes also symbolize zebras.

The Lay of the Land

Botswana is roughly the size of France, but only has about 2 million inhabitants. This, in comparison to the 66.9 million inhabitants living in France, means that it is a very scarcely populated country. The Kalahari Desert covers 70% of the country.

Botswana is home to the world’s largest inland Delta, named the Okavango Delta. In between March and June, the Okavango swells to three times its size and becomes a marshy wetland. In these months, you can see cheetahs, lions, and ostriches swimming and prancing in the water. This is the only place in the world where you will find these animals that are comfortable to swim in water.

Botswana reserves 35% of its country for national parks. In fact, over 50,000 wild elephants can be found on the national parks in the country, which is more than any other country in Africa.

English and Tswana are the two most frequently spoken languages in Botswana, though English is far more common.

The currency in the country is called pula, which in Setswana means rain. The Batswana value rain highly because of its value and importance to life, just like money. A pula divides into 100 thebe, which directly translates to “shields.”

In Steswana, foreigners are called lekgoa, which means “spat out by the sea.”

Food Culture and Flavors in Botswana

Food in Botswana tends to not have many seasonings. The most common meat ingredients are beef, mutton, lamb, and chicken. Spinach, potatoes, carrots, and cabbage grow plentifully, as well as peanuts.

Watermelon originated in the country, and the Batswana eat and grow it often. Many types of melons are popular sources of food and water for those living in the desert of Botswana.

Sorghum and maize form the basis for many of the meals in Botswana. Woodland worms (Mopane Worms) are pulled from Mopane trees, fried, and eaten as a delicacy. They can be found sold by the bag in markets.