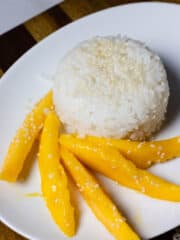 Mango with Sticky Rice from Brunei 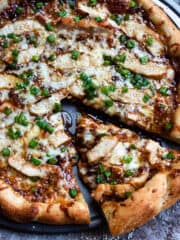 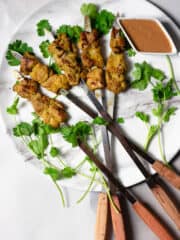 When it came to Brunei, I was clueless. First of all, I hadn’t ever heard of the country, let alone did I know where it existed on a global map. In fact, I was pronouncing the country as Bru-neigh (like a horse) the entire time I was cooking its meals. It wasn’t until I watched a video about the country that I learned its true pronunciation… Bru-NIGH (rhymes with high). Which means that I DEFINITELY didn’t know what kind of food the Bruneians eat. Ah yes, I was pleasantly surprised!

Turns out, Brunei has very similar food to Thailand. Peanut sauce, mango with sticky rice… eating from this country was such a pleasant surprise!

Brunei came with my very first experience on a barbeque grill! To be honest, the grill part was kind of a disaster, but you can read all about that on my post about my Chicken Satay.

After reading about Brunei, it 1. Intimidates me and 2. Intrigues me. The photos of the palaces are beautiful, and I’d love to visit so that I could explore the religious buildings, amusement park, palace, and rainforest. It seems that there is definitely quite a bit to do in Brunei!

Unfortunately, I won’t be able to visit anytime soon, but I CAN get a taste of Brunei through this week’s cooking challenge! And so can you! Get ready because the food is YUMMY YUMMY YUMMY.

Brunei is located on the island of Borneo in Asia. About 50% of the land in the country is reserved for national parks. But despite its fertile soil, only 2% of the remaining land is used for planting. This is because most of the country contains very rich oil fields underneath the ground!

Because of Brunei’s lack of agricultural land, most of the food that Bruneians eat must be imported from neighboring countries. In fact, the Brunei government owns a cattle ranch in Australia that is larger than the ENTIRE country of Brunei. This ranch supplies most of the country’s beef products.

The Sultan of Brunei

If you couldn’t tell from his name, the Sultan is extra in many ways. He lives in a palace that is 2,152,782 square feet and contain 1,788 rooms. On his 50th birthday, the Sultan had a stadium built and paid Michael Jackson 17 million dollars to perform 3 concerts.

Despite his love of a lavish lifestyle, the Sultan is also very generous to the citizens of Brunei. Free healthcare is provided to all, and, despite cost, every citizen of Brunei can buy whatever medicine they need for 1 BND. On holidays, the Sultan opens up his home to the citizens for prayer and celebration.

He is the second longest reigning monarch in the world at the moment, behind only Queen Elizabeth of England.

The food of Brunei is influenced heavily by its neighbors Singapore, Malaysia, and Indonesia and also has hints of Thai, Chinese, Japanes, and Indian cuisine. Due to the high number of Muslims in the country, most of the food is Halal, meaning that pork is banned. The sale and consumption of alcohol is also banned in Brunei, though visiting foreigners are allowed to bring 2 litres of alcohol per person.

In contrast to the plain food of Botswana from a few weeks ago, the food of Brunei is full of flavor. Plenty of spices are used in the local foods, and the meals are often spicy.

Most meals are eaten with rice or noodles as a base. One specific popular food of Brunei is Ambuyat, which is a sticky ball made of sago starch. It is flavorless, but acts as a good base for the meals.

Fish dishes– shrimp, squid, etc– are popular on this island country, as are tropical fruits like mango, papaya, and lychee.