Everything you need to know about Grenada including background, food culture, history of Grenada, and popular recipes to make. 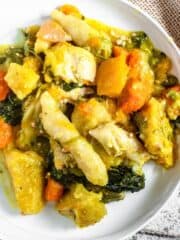 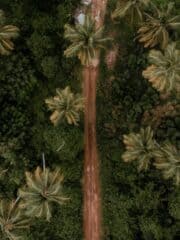 Grenada is a beautiful country with kind people, gorgeous beaches, and amazing food! If you’ve ever wanted to learn about Grenada, this article will teach you about the amazing “Spice Isle” in the Caribbean.

The country of Grenada is made up of three main islands: Grenada, Carriacou, and Petite Martinique. It lies 100 miles north of Venezuela in a long chain of islands that make up an archipelago in the Caribbean Sea.

The islands in the Lesser Antilles region are categorized into two groups: Windward Islands and Leeward Islands. Grenada is a Windward island alongside Dominica, Martinique, Saint Lucia, Saint Vincent, and the Grenadines.

The entire country is only about 133 square miles. The island of Grenada is 120 of those miles, while Carriacou is 13 square miles, and Petite Martinique lives up to it’s petite name by being only 486 acres.

Weather wise, Grenada has some wonderful temperatures with the average temperature being about 81 degrees. It can get as low as 70 at night and as high as 86 during the day.

Unfortunately though, like many islands in the Caribbean, Grenada is susceptible to hurricanes. In 2004, it was hit particularly badly by Hurricane Ivan, leading to large-scale destruction of 90% of the island’s buildings, 39 deaths, and a long period of rebuilding.

The environment of Grenada ranges depending on where you are on the islands, but the country is known for beautiful beaches, lush rainforests, and glorious lakes (in extinct volcanic craters nonetheless!).

If you’re on either Carriacou or Petite Martinique, there are no freshwater sources. Instead, the inhabitants have to collect rainwater during the rainy season to get them through.

The capital of the country is Saint George’s (or St George’s) and is home to about 7,500 people.

Grenada’s history begins many centuries ago, when the Ciboneys lived on the islands. They most likely migrated from Cuba, Hispaniola, and even Florida! The Ciboneys were nicknamed The Stone People.

Next to arrive were the Arawak people of South America, who crossed the ocean to settle on the islands. The Arawak were peaceful people and lived on fish and cassava.

Christopher Columbus stumbled upon Grenada in 1498 on his third trip to the Caribbean. He originally changed the name of the island from Camerhogne (the Amerindian name) to Concepción.

Eventually the name transitioned to Grenada in the 16th century, perhaps to remind Spanish sailors of home in Granada, Spain.

In 1650, two Frenchmen bought Grenada (at the time called Grenade). This was a terrible time in the country’s history, as the French were intent on overrunning the Caribs (the indigenous people). By the time their conquest was over, only 40 Caribs remained on Grenada. Rather than surrender, they jumped off of a cliff to their deaths. The cliff is now called Leaper’s Hill.

On August 1, 1838, slaves were emancipated across British colonies including 24,000 slaves in Grenada. Many slaves transitioned into a subsistence farming role, selling whatever crops they had left over.

In 1877, Britain made Grenada a crown colony, meaning it was a dependent territory. However, Grenada (and many of the other British colonies in the Caribbean) wanted their own representation in government. By 1956, all crown colonies had transitioned to self-government.

On February 7, 1974 Grenada was granted its independence! Eric Gairy was the first Prime Minister of the country. Unfortunately, Gairy soon became a dictator that believed he was the Messiah and God’s messenger.

Gairy was overthrown and replaced by Maurice Bishop, a Grenadian revolutionary and leader of the New Jewel Movement, in 1979. His cause was supported by the vast majority of people in Grenada. He was executed in a coup in 1983 along with many of his supporters. This is a complicated topic, but it is described well in this video.

In 1983, the United States entered Grenada, killing and injuring many people in the process. They restored the country’s constitution and held elections in 1985.

Today, though Grenada is still an independent country, it is also a constitutional monarchy with Queen Elizabeth II as the Queen of Grenada.  This just means that Grenada is part of a voluntary policial association in which the countries share history and culture with other countries that were also British territories.

Have you ever heard of island time, the laid back and relaxed lifestyle in most Caribbean islands? Grenada is no different.

Much of the men in Grenada are fishermen and many of the women are gardeners. Both attend markets on the weekends where they can sell their goods to others. Another common industry is tourism, as much of the country’s income comes from tourists.

The church is very central to life in Grenada, and there are traditional ceremonies for weddings (dancing the cake and bearing flags) and deaths (Stone feasts to bless the headstone before it marks a grave).

Grenada is mostly Christian, with over half of the people being protestant and 36% being Roman Catholic.

Some Grenadians also hold spiritual beliefs related to their African heritage. One of these religions is called Shango and also has roots in Christianity. The other is called Obeah and is more similar to sorcery, including casting spells and interacting with the supernatural.

Grenadians value their education, and the country has the lowest dropout rate in the Caribbean. Kids go to primary school between the ages of 5 and 16 and then can continue on to secondary school. The literacy rate in Grendians above the age of 15 is 98%!

English is the official language of Grenada, but it may be difficult to understand for those not used to English with Caribbean accents and modifications.

Grenada being nicknamed the Spice Isle sure has impacted its food! Some report that even the air in the country smells faintly of nutmeg, Grenada’s most popular spice.

The food of Grenada has been influenced by all of the countries that have touched it, including France, Britain, Africa, Portugal and India. India introduced Grenada to the concept of roti, a flatbread (that looks similar to a tortilla) made of flour and water.

Callaloo is a popular green that is eaten in many dishes in Grenada, including the national dish Oil Down. Callaloo is made of the leaves of the dasheen plant.

As mentioned before, Grenada is full of delicious species, including ginger, vanilla, cloves, nutmeg, and more. Keep in mind that Grenadians call turmeric “saffron” as this can get confusing when trying to make some recipes from the country.