Everything you need to know about Greece including background, food culture, history of Greece, and popular recipes to make. 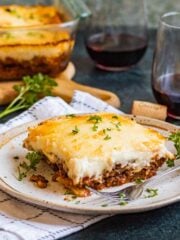 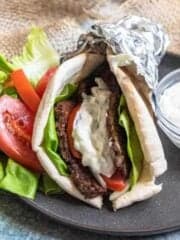 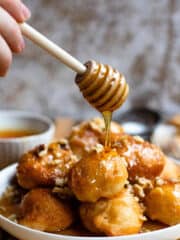 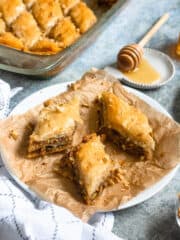 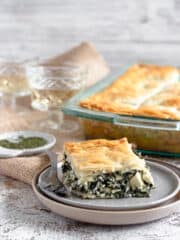 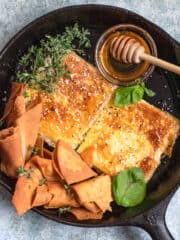 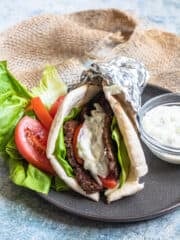 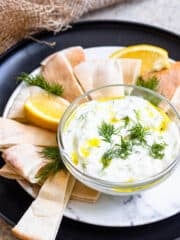 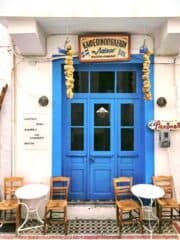 Modern Greece is only 52 years younger than the United States! It was founded in 1828, after the Greek War of Independence.

Of course, Greece is far older than this with roots stemming all the way back to 8th century BC, when Ancient Greece was a thriving community. The Ancient Greeks had an immense part in shaping our community, civilization, and way of life today.

Though the shape of Greece has changed almost continuously over time, today’s Greece is about 50,000 square miles (about the size of Alabama) and resides in Europe.

It borders Albania, Bulgaria, Turkey, and North Macedonia. It also borders two bodies of water: the Aegean Sea and the Ionian Sea.

Greece consists of one mainland and 1,200 islands surrounding the country, though only about 227 of these islands are inhabited.

About ¾ of Greece’s mainland is covered in mountains, including the Pindus Mountains range. The country’s highest point is Mount Olympus, and is, notably, the home to the Greek gods in Greek mythology.

The capital of Greece is Athens, with more than 40% of the population living there. Athens is full of Greek history, a modern-day civilization nestled amongst Greek history, including the Acropolis, the Parthenon, the Temple of Zeus, and more.

Greece has been home to humans for centuries, with human remains discovered in the country that are close to 100,000 years old.

The Dark Ages lasted until 800 BC, at which point the rise of city-states began. City-states were small civilizations that were united under the government of one city.

The Greek word for a city-state was “polis”, and some of the most well known city-states of the time were Sparta, Athens, and Thebes.

These city-states were the birthplace of democracy. Though they originally were ruled by monarchies, by 500 BC, democratic elections were taking place.

At this point in time, citizens of city-states in Greece did not think of themselves as Greek. Instead, each person identified themselves primarily as what city-state they were from. For example, people from Sparta thought of themselves first as Spartans, etc.

However, in 480 BC, the individual city-states worked together to fight the Persians, resulting in a Greek victory!

Culture and History in Athens

After the defeat of the Persians, Athens began to absolutely flourish. It is during the 6th to 8th centuries, also called the Golden Age of Athens, that much of Ancient Greece’s contributions to the world were created.

The Iliad and The Odyssey were written during this time. Greek theatre flourished; Architectural feats were created; Socrates, Aristotle, and Plato forever affected philosophy.

So much of the world today was greatly influenced by these 3 centuries of Ancient Athens.

Unfortunately, in 431 BC the Peloponnesian Wars began between the city states. This eventually led to Sparta overthrowing Athens, and then Thebes overthrowing Sparta. The Golden Age was over.

By the 4th century, King Phillip II of Macedon wished to conquer the city states and bring the Greek way of life to other people across Europe.

Before he could realize his dream, however, he was assassinated. His son Alexander, later called Alexander the Great, took over his father’s hopes. He only ruled for 13 years, but in this time frame he created one of the largest empires in history.

After Alexander died in 323 BC (at the age of 33), the empire fell and separated, leaving Macedonia in charge of Greece. Though it was short lived, Alexander’s achievements allowed Greek culture to spread through his empire, leaving a lasting Greek impact on Europe.

Greece’s history with large empires was not finished. By 146 BC, the Roman Empire had gained control of Greece.

The Romans admired the Greeks greatly, and pulled many influences from the Greek way of life. It was during this period of time that Roman mythology (a mirror of Greek mythology) was born.

Eventually the Roman empire became divided and fell, and the remaining portion– the Greek-speaking side– became known as the Byzantine Empire. For almost 9 centuries, (until 1204) the Byzantine Empire remained in power, until it fell to Frankish crusaders and became ruled by Franks and Venetians.

Turkey took over in 1453 and, though they allowed religious freedom in Greece, caused poverty and strife for the Greeks in the empire. Eventually the Greeks revolted and in 1827, France, Russia, and Britain helped Greece fight Turkey.

In 1829, Turkey signed a treaty giving Greece their freedom.

For a while, Modern-Day Greece was ruled by foreign kings appointed by the Allies, including Prince Leopold of Saxe-Coburg, Prince Otto of Bavaria, and Prince William of Denmark.

In the years between 1935, and 1973, Greece moved between a monarchy, a republic, and a dictatorship.

In 2009, it was announced that Greece’s finances were a disaster with a public debt of $410 billion and an unemployment rate of 10%. Due to fears that Greece defaulting on its debt would lead to a world-wide economic collapse, the eurozone leaders wrote off 50% of the country’s debt.

The People of Greece

Greece is made up of about 10.8 million people. About 93% of them are Greeks, while the other 7% is made of Slavs, Albanians, Turks, and Jewish people.

Almost the entire country speaks Greek, but about 51% of the country also speaks English.

Greeks value hospitality and family, often having large families that celebrate holidays together, visit often, and value the head of the family strongly.

Patriotism runs deep in Greek blood, and even if Greeks have left their country to live overseas (or even in other countries in Europe), they remain proud of their heritage and traditions.

These days, the official religion of Greece is Greek Orthodox Christianity, and over 90% of the population identifies with this religion.

For fun, Greeks listen to Greek Folk music and participate in Greek Folk Dancing, with each region having its own folk dance and costume.

They also love to watch soccer and basketball games. Of course, Greece is the home of the Olympic Games! The Olympics began in Ancient Greece in 776 BC. In 393 BC a Roman emperor, Theodosius I, banned the Olympics because they were a sign of “pagan” tradition.

It wasn’t until 1896 that the Olympic Games were revived again by Baron Pierre de Coubertin!

Not only is Greece home of the Olympics, it is also the origin of the first marathon. The marathon is a tribute to a runner who ran from Marathon to Athens (26 miles) after a Greek victory in war to share the good news. He reached his destination, shouted of Greek victory, then died. The marathon has been run ever since!

Greece has some of the best food in the world, so it makes sense that food is such an important way of life in the country!

Mealtimes are important to the Greeks. Breakfast is normally a light meal, made only of coffee and sometimes toast or a roll.

For lunch, large meals are served, including meat, appetizers, salad, fruit, and alcohol. It’s not uncommon for shops to close around lunchtime so that Greeks may enjoy a good meal and even a post-lunch nap.

Dinner is a smaller affair, normally consisting of lunch leftovers and maybe a sweet at the end.

As for dessert, there are so many great options to choose from. Greeks love using honey in their desserts! A great example of this is loukoumades, an ancient dessert that were served to Olympic champions after the games and are still eaten to this day!

Popular ingredients in Greek food include lamb, chicken, and pork as the most popular meats. Common vegetables include tomatoes, olives, green peppers, greens, eggplants and more. Olive oil is greatly important in Greek cooking, as are herbs like oregano, basil, parsley, and more.