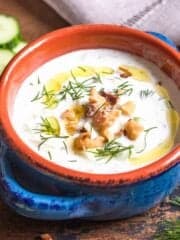 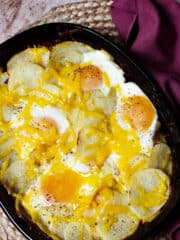 Gyuveche (Casserole with Potatoes) from Bulgaria 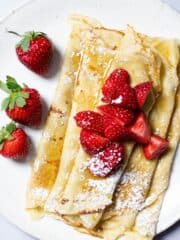 Bulgaria is known as the crossroads between Europe and Asia. It is now made up of 28 different provinces, and borders Serbia, Macedonia, Turkey, and the Danube. Sofia is the capital of the country.

Bulgaria is known for its beautiful landscape, with each turn in the country providing a new surprise. The stone mushrooms of Beliplast are beautiful, but Belgium is truly known for its caves (click here for a list of Bulgaria’s top caves). There are 4500 chartered caves in Bulgaria. The biggest fans of the Bulgarian caves are the bats, as 32 of 37 species of bats that live in Europe live in Bulgaria.

Bulgaria has its original roots in Roman, Greek, and Byzantine civilizations. However, it wasn’t until the Slavs moved there in the 6th and 7th centuries that Bulgaria truly began. The name Bulgaria comes from the Bulgars, which were a nomadic tribe that came from the steppes north of the Black Sea. The Bulgars were so strong that their culture began to permeate the area in which they had settled.

The Byzantine Empire signed a treaty in 681 CE which officially formed the First Bulgarian Kingdom. In 796, Khan Krum (also known as Krum the Horrible) ruled over the country. He created laws that punished robbery by ankle-breaking. Denying alms to a begger was punishable by seizure of property in the name of the ruler.

The Ottoman Empire eventually conquered Bulgaria. This ultimately ended in an 1877 treaty by Turkey that declared Bulgaria’s independence. This didn’t last long, though. Five months later the Berlin Congress of the European Superpowers removed three of Bulgaria’s main provinces.

For years, Bulgaria continued to lose land and power during the First and Second Balkan Wars and World War I. The Bulgarians unwillingly took the German side during World War II and later became a communist state under the Soviet Union.

Finally, Bulgaria received its first non-Communist president in 1990. Though it is on the right path, Bulgaria still needs a lot of development to happen in the years to come.

At first, Bulgarians do not come off as very welcoming, but they make sure to take care of their fellow Bulgarians. They are very hospitable to friends and strangers alike, offering food or drinks to anyone that happens across their doorstep.

Bulgarians tend to have a traditional view of familial life. Many generations live together in one household, and share responsibilities in taking care of finances and children. Children become incredibly close to their cousins and their grandparents, sometimes even closer than they are with their own parents. Children live with their families until marriage, and often after as well!

Bulgarians love to make wine. On the weekends, they gather together to taste each other’s wine and play games like cards. Even more than wine, Bulgarians love coffee. They drink coffee at any point during the day, especially during the evenings.

Because family life is so important in Bulgaria, most families try to spend as much time enjoying a meal together as possible, usually at least one meal a day.

Breakfast tends to be very light, almost nonexistent. Perhaps a piece of toast will hold Bulgarians over until their hearty lunch. Lunch is a much larger affair, consisting of soup, a main course, a side of vegetables, and dessert. Dinner is again, light, but is often served with an aperitif.

Common meats in Bulgaria include lamb, pork, veal, or chicken. They enjoy cucumbers, peppers, spinach, green onions, eggplants, potatoes, and other fruits and vegetables. Bulgarians also eat a lot of cheese and bread.

Bulgarians take much pride in their yogurt and eat it every single day. In fact, Bulgarians credit their longevity to their yogurt, which is more nutrient-rich than most other yogurts on the planet (see Tarator recipe for more information on Bulgarian yogurt).