Everything you need to know about Germany including background, food culture, history of Germany, and popular recipes to make. 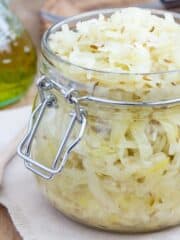 What To Eat with Sauerkraut 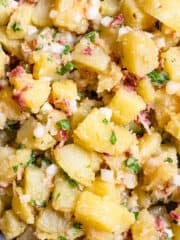 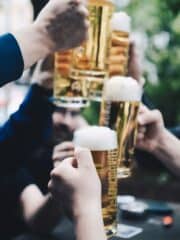 German Food: Everything You Need to Know 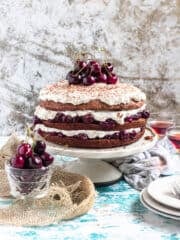 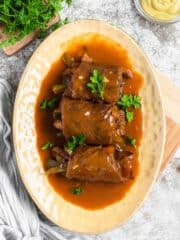 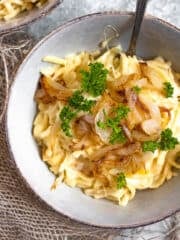 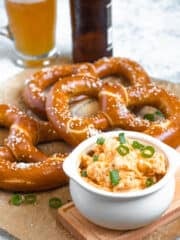 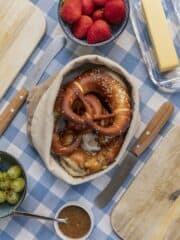 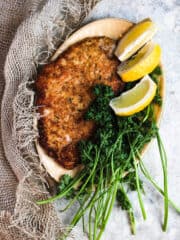 The name Germany dates all the way back to Ancient Roman times when the tribal people to the north and east of Italy were called Germani (and the Germanic people).

A common language was spoken among the Germanic people, and those that spoke that language were called deutsch, which, literally translated, means “the people”.

Eventually, when the country of Germany was formed, the people called it Deutschland, which means “The Land of the People”.

Germany is located in central western Europe bordered by the Netherlands, Belgium, Luxembourg, Poland, Czech Republic, Austria, Switzerland, France, and Denmark. It is considered the heart of Europe because of its location geographically, but also because of its role in European history and economy.

The Northern part of Germany is so flat that dikes are necessary to keep the land from flooding during large storms. As you get closer to central Germany, the land begins to form the southern, German Alps. The highest point in Germany is a point on the German Alps, Zugspitze, at 9,717 feet (2,962 meters).

Germany has many rivers running through it, the most notable of which is the Rhine. The Rhine flows west from Lake Constance and forms the border between Germany and Switzerland.

It is one of the most forested countries in Europe and is known especially for the Black Forest which is filled with evergreen trees! Common wildlife includes wild goats, deer, otters, and weasels.Wolves are slowly making their return to the country after disappearing 150 years ago.

Germany’s 3 largest cities are Berlin (the capital and largest city), Hamburg, then Munich.

About 10,000 years ago, shortly after the last Ice Age ended, the Celts ventured across Europe, some of which ended up in what is now called Germany.

The formation of new Protestant groups around 1517 drove the Germanic states apart and eventually spurred the Thirty Years’ War, in which both sides fought over their right to remain within the Roman Catholic Church or become Protestant.

Following the end of the Thirty Years’ War (1648) the Habsburgs began ruling over the kingdoms of the Holy Roman Empire that became the Austro-Hungarian Empire (with Germany included).

In the end of the 18th century, Napoleon Bonaparte came to power in France, and succeeded in taking over parts of Germany in the process. You can read more about Napoleon’s rise and fall in the France article.

In June of 1914, Archduke Franz Ferdinand, the heir to the throne of Austria, was assasinated. War erupted in Europe between the Central Powers and the Allies. The Central Powers were made up of Germany, the Austro-Hungarian Empire, Bulgaria, and the Ottoman Empire. Great Britain, Russia, France, Italy, Romania, Japan and the United States made up the Allies.

The war only lasted for four years, but in that time more than 10 million soldiers were killed, 2 million of which were German.

After the war, the Allies assigned Germany intense repercussions (the Treaty of Versailles), including confiscating some of their most valuable land, shrinking their army, and forcing Germany to pay for the damages done during the war.

This treaty had devastating effects on Germany’s economy and the way that it’s citizens were living. Eventually, Adolf Hitler came into the picture, telling anyone that would listen that the financial problems of Germany were being caused by Jews, the disabled, gays, gypsies (now called Roma) and many other marginalized groups.

As Hitler gained power, Jewish people were losing their rights every day, and eventually “work camps” (now known as concentration camps) were built for the torture and killing of these marginalized groups, especially Jewish people.

Germany went on to invade Austria, then Poland, France, and the Soviet Union. Germany met resistance during their attempted invasion of Great Britain, which became known as the Battle of Britain.

In 1944, the Allies (led by the United States and Great Britain), invaded the European continent, eventually pushing back German troops.

Hitler could tell that Germany was losing the war and committed suicide on April 30, 1945. On May 8, 1945, the Germans surrendered World War II.

The devastating effects of World War II were felt around the globe, including the deaths of 9 million innocent people. These deaths became known as The Holocaust.

The Allies were responsible for deciding what happened to Germany after their surrender in World War II. West Germany was formed under a new constitution and on May 23, 1949 became known as the German Federal Republic.

The Soviets, however, had different plans for Germany. They wanted Germany to be responsible for fixing the damage done to Soviet land during the war. They formed the German Democratic Republic, also known as East Germany, on October 7, 1949.

Eventually East Germany decided to cut off travel between the two by putting up barbed wire, wire fences, and finally a solid brick wall. This was called the Berlin Wall and was completed in 1961. The Berlin Wall stayed up for more than 20 years, separating families and creating vastly different lives for those on either side.

In 1985, a new Soviet leader, Mikhail Gorbachev, came into power and began giving small freedoms to those in East Germany. By 1989, East Germans were granted the ability to travel. At this news, they began tearing down the wall (a spectacle celebrated worldwide), slowly but surely opening up the border between East and West Germany once more.

On October 3, 1990, East and West Germany reunited as one country again and made Berlin its capital.

In the years since the fall of the Berlin wall, Germany has rebuilt itself quickly. It is now again an economic superpower, a large exporter, an important part of the European Union.

It is known for having the fourth largest economy in the world, due largely to its exports. These include wheat, milk, Volkswagen cars, Adidas, Puma, Haribo Gummy Bears, Nivea face cream, and so much more.

German is the main language spoken in the country. About ⅓ of the people in Germany do not identify with any religion, with most of these people coming from East Germany. Christianity is the largest religion in Germany (22.6 million people) with Islam being the second most popular (4.3 million people).

Oktoberfest is a fair that is held in Munich during September and October. At first, the fair was invented as a way to celebrate the marriage of Prince Ludwig in 1810. The festivities proved so popular that they were repeated the next year.

Oktoberfest has been a tradition in Munich since then. It is celebrated by drinking copious amounts of beer.

German meals are very heavy in meat and potatoes. The biggest meal of the day used to be lunchtime, but in modern days, both parents are typically working during the day, so dinner is starting to become the larger meal.

Lunch normally includes a large meal including meats and vegetables. In a rush, a hot pastry filled with cheese will suffice.

Dinner will include sausage, perhaps some potato salad, or a soup.

Germany is popular for many foods, but, arguably, the most popular is its sausage (called wurst in German). It is said that Germany has over 1200 kinds.

Beer is, of course, a German cultural phenomenon with some of the world’s most popular beers coming out of Germany. There are over 1,300 breweries and 5,000 varieties of beer in the country.