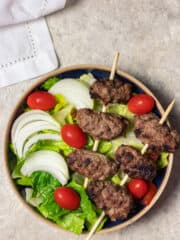 Cevapi from Bosnia and Herzegovina 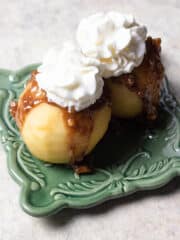 Tufahije from Bosnia and Herzegovina 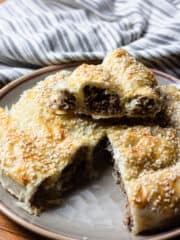 Burek from Bosnia and Herzegovina

Bosnia and Herzegovina was such a fun country to cook! My favorite recipe from this country is the Burek… I made this for a family gathering (at the same time that I made that Quinoa Salad from Bolivia) and by the time that the meal was over, that Burek plate was licked CLEAN.

Okay, it wasn’t licked. But it was scraped clean with a fork!

The Tufahija was a challenge (making it is easy now… it was coming up with the recipe that was hard). I had to change around my ingredients a bit, but I finally ended up with a product I was proud of!

I can’t wait for you to try all of the recipes for this week! Do you have more questions for me about Bosnia and Herzegovina? Which recipe are you the most excited to try? Leave a comment and let me know!

Bosnia and Herzegovina is located on the Balkan Peninsular and has been an independent country since 1992. Prior to this, however, it was part of the Ottoman Empire, the Austro-Hungarian Empire, and Yugoslavia. Because of this its varied background, Muslims make up about 45% of the population.

In addition to these two entities, there is also the territory of Brcko, which is a neutral ground that belongs to both entities, but it governs itself.  This was the country’s answer to political tension that has resulted from the Yugoslavian wars in the 1990s. “Sarajevo roses” in the Sarajevo portion of the country are mortar blasts in the sidewalks that were filled with pink concrete from the Yugoslav wars from the 90s.

The Land and Geography of Bosnia and Herzegovina

Bosnia and Herzegovina has the last remaining jungle in Europe called the Perućica Forest. This forest contains the world’s tallest Norwegian spruce tree and many other trees that are over 300 years old.

Much of the country is very hilly, and in some places, the hills look like geometrically perfect pyramids. Some people of Bosnia and Herzegovina will tell you that their country is home to the largest man-made pyramid, though no one can agree if the feature is made of earth or if it is truly a pyramid.

Food Culture and Flavors in Bosnia and Herzegovina

Many of the flavors of Bosnia and Herzegovina are similar to Turkish and Mediterranean foods, probably because of the Ottoman rule that lasted in the country for over 400 years.

Many of the meals are light on meat and heavy on the vegetables. For the most part, meat dishes need to be cooked to Halal standards because of the high concentration of Muslim people in the country.

Spices and sauces are used sparingly as well. Spices aren’t used overwhelmingly– just a touch to add flavor. And sauces are typically made from the natural juices of the vegetables and meats that are cooking.