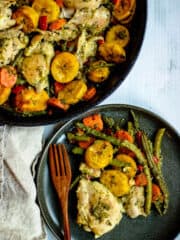 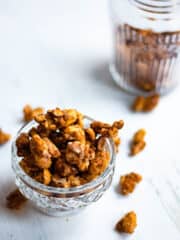 How to Make Candied Nuts at Home

When it came time to make the food of Cameroon, I was a little nervous. I typically use books that I find in the library to research the countries that I’m cooking, but sometimes my library doesn’t carry ANY books on certain countries. Cameroon was one of those countries.

It’s hard for me to find great recipes from countries that don’t have a lot of research posted about them— usually countries on the African continent. This means that many of the African countries I have cooked are a challenge… but that also means that they’re an excitement!

I sat down at my computer, eager to find some recipes that were true to Cameroonian culture but also different than the recipes I had cooked before for this blog. I’m lucky because I stumbled on an awesome post from African Bites that details out some of her favorite Cameroonian dishes. Suddenly, I had so many choices to pick from!

I picked a couple dishes from the list and got to work. I’ll admit— I did try to make a third recipe from Cameroon. I cooked N’dole, which is a stew made from spinach and peanut butter and is the national dish of Cameroon.

I’m a peanut butter FIEND. In fact, I eat peanut butter and a banana almost every single morning of my life. But one thing I’ve learned from my journey of cooking a meal from every country in the world is this: I do not like savory dishes with peanut butter. They always make me feel a little nauseous for some reason? (except for like… thai peanut pasta or something like that).

Anyways, I tried making the N’dole, but I just couldn’t post it. It just didn’t taste right, mixing my peanut butter with my seafood. Even if I had done everything completely right and it would have tasted good to other people, it didn’t fit my flavor palette, so I didn’t include it. This is not to say that this is a bad dish from Cameroon, just that it wasn’t my personal favorite. And I will only post dishes that *I* like on this blog!

This just tells you, though, that I really love the two recipes that I DID post from Cameroon! Always honesty here, my friends.

So, without further ado… what’s on the menu this week?

– Cameroon is home to 2 of the only 3 exploding lakes in the world (the other is on the border of Rwanda and the Democratic Republic of Congo). These lakes have a build-up of carbon dioxide that is held underwater by the pressure of the lake. If there is ever an earthquake or landslide— such as what occurred in 1986— the pressure is released, meaning that the carbon dioxide emanates from the lake. When this happened in 1986, 1700 people and 3000 animals were essentially suffocated to death by the sudden release of carbon dioxide, making it one of the biggest natural disasters of the 80s.

-The people of Cameroon wanted to raise money for America during the Great Depression. In 1931, they donated $3.77 to the United States. How sweet!

Cameroon is a very well-integrated state, as it borders 6 countries in Africa. It is located at the crossroads between Central Africa and West Africa, and it’s unique shape extends the country through many of the differing climate regions in the continent.

Because of this, Cameroon is known as “Africa in miniature” because it experiences every climate and ecosystem that Africa itself contains. Cameroon extends between the coast, the dessert, the mountains, AND the jungles of Africa.

In addition to these regions, Cameroon also reaches up to the country’s active volcano, Mt. Cameroon, and Lake Chad. Lake Chad used to be the largest lake in the Chad Basin, but it is currently depleted to only about 5% of its previous size. Most of this 5% is located within the tip of Cameroon.

Cameroon is one of the wettest places on Earth, with some of its regions reaching rainfall levels of 10,299 mm. 10% of the roads in the country are paved, but the smaller towns tend to be spread out far from each other. For ease of travel, many of the towns have airplane runways for mail delivery.

Cameroon was first “discovered” by the Portuguese. It got its name from the Portuguese word “Camarões” meaning “shrimp” because there were shrimp in the rivers when the Portuguese arrived. The country had changed hands between the Germans, the English, and the French until it finally became an independent republic on January 1, 1960.

Since becoming independent, Cameroon has only had two presidents. The first was Ahmadou Ahidjo who held office from 1960-1982. Since then Paul Biya has been president since 1982. During his term, Biya changed the term length from 4 years to 7 years. The people of Cameroon reelected Biya in November of 2018, so he will serve for another seven years at least.

Biya often receives a lot of criticism for being a negligent president. He spends much of his time vacationing in France, even while his country is undergoing hardships.

The People of Cameroon

About 20 million people live in Cameroon, 40.1% of which belong to the Highlander tribe and 30.2% of which are part of the Coastal Bantu Tribes. English and French are the official languages of the country, but there are over 230 languages and dialects spoken. They differ, but neighbors can often understand each other, even if their dialect is slightly different.

The culture of the people varies greatly as well. Each tribe in each location has different customs and traditions and housing.

The Food of Cameroon

Due to the string of governing countries before Cameroon’s eventual independence, there is a large amount of foreign influence over the country’s food.

For example, the Portuguese introduced maize, tomatoes, and cassava. The French introduced omelettes and French bread, which the Cameroonians still eat for breakfast in the country today. The other tribes of Cameroon, the Bantus and the Semi-Bantus, also provide much inspiration in the food of the country.

Similar to many of the other Central African countries we have explored, staples in the country include yams, rice, plantains, maize, etc.

The main source of meat is fish, but a large portion of the protein that the country consumes comes from “groundnuts”, what we refer to as peanuts.

The national dish is N’dole, a spinach and peanut stew that is topped with prawns. Porcupine, giant rat and pangolin are delicacies because of their rarity.

When sitting down to a meal, the diners pass around a wet towel to wash their hands. This is because Cameroonians eat out of communal bowls. They dip three fingers into a starchy food such as fufu or millet and then dip them into stew or sauce.

Men serve themselves first, and women follow. Children wait until the dining is done and eat what is left over.

When cooking meals at home, most cooking is done over wood or charcoal fires. Almost everything is made with iron pots and wooden spoons.