For delicious recipes from Denmark, visit the linked recipes under “On the Menu” below.

The Danish flag is called a Dannebrog and is the oldest consistently used flag in the world. It is a red flag with a white Scandinavian cross.

The colors of the Dannebrog don’t have an official meaning, though some say the red symbolizes strength and bravery while the white symbolizes peace and honesty. 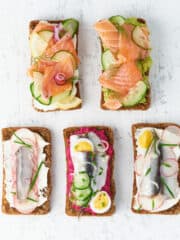 Danish Food: Everything You Need to Know 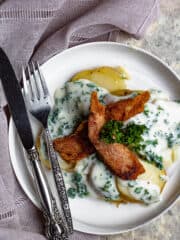 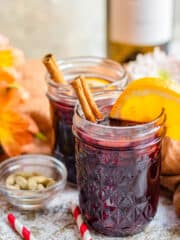 Mulled Wine in the Instant Pot 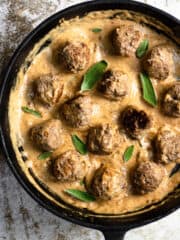 The Early History and Vikings

The earliest inhabitants of Denmark were hunter gatherers who hunted reindeer. Agriculture came to the country in 300 BC.

The Vikings from Denmark brought terror to Europe from the 9th to the 11th Century AD. The terror began with Vikings raiding and looting small towns and then retreating to their boats at sea.

Eventually, the Vikings began conquering the cities that they raided. In 1013, the King of Denmark, a Viking named Canute, took control of England which lasted until 1042.

In 1157, Valdemar I took over the throne in Denmark, and built the country significantly by initiating the building of schools, fortresses, churches, etc. After his reign, the country fell into a period of Civil War, as the clergy took power from the kings.

This ended in 1340 when Valdemar IV reunited the country. His daughter, Queen Margrethe, completed the Union of Kalmar in 1397 that united Denmark, Sweden, and Norway. Though Sweden broke away in 1523, Denmark ruled Norway until 1814.

Queen Margrethe II has been the queen in Denmark since 1972, though her position is almost entirely ceremonial. There is also a Prime Minister in Denmark (Mette Frederiksen) that has more political power.

Denmark is a Nordic country along with Finland, Sweden, and Norway. It is considered Europe’s “gateway” to the Nordic countries as it shares a border with Germany.

No place in Denmark is more than 32 miles from the sea, and 80% of the Danish live in a city with a coastline!

During the Ice Age, glaciers sat on what is now Denmark for over 100,000 years. As the Ice Age came to an end, these glaciers began to melt and move across the country, giving it the flat topography it has today. The highest point of Denmark is 170 meters or 550 feet.

Denmark also owns the island of Greenland, which is the world’s largest island that is not a continent, and the Faroe Islands.

There are 5.7 million people in Denmark, 87% of which are of Danish descent.

The main source of income for Denmark is manufacturing and agriculture (there is enough agriculture to feed 15 million people). One of its most famous exports is Legos!

Danish people tend to have the blond hair and blue eyes typical of Nordic countries (though of course this is not true of everyone).

The country has one of the lowest crime rates in Europe and in 2004, 55% of the population gave money to charity. Denmark ranks as one of the happiest places on Earth, and the average Dane works a 33-hour work week and gets 5 weeks of paid vacation.

The country’s universal access to health care and free higher education contributes to the “happiness rating” of the country, but it comes at an expense. Denmark is one of the most heavily taxed countries in the world, with up to half of their income going to taxes.

Bread is a major part of breakfast in Denmark, with rye bread being the most popular option.

For lunch, Danes like Smørrebrød, or Open-Faced Sandwiches. Smørrebrød often uses crispy rye bread and can be topped with spreads, vegetables, herbs, and proteins.

For a main dish, fish (especially herring) is often preserved and then served with garnishments. The Danish also love homemade soups, meatballs, and burgers.

For dessert, Danish pastries are very popular. These typically take quite a long time to make, as the dough is folded over into 27 layers.