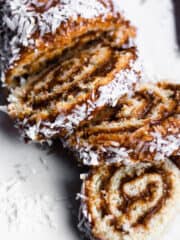 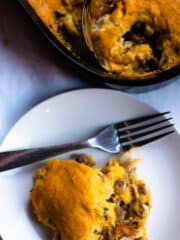 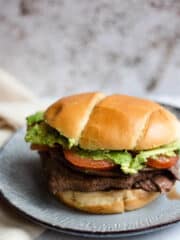 It’s been a hot minute since we’ve visited a country in South America… In fact, the last time we were here was during Brazil! Thank goodness we’re back, because I’ve been needing some yummy empanadas in my life!

I don’t know what it is about South America, but cooking a South American meal is always so exciting to me! Maybe it’s because I spent so long studying these countries as a Spanish minor in college? Or because I’m more familiar with them than countries on other continents? Maybe it’s because of the awesome desserts they all inevitably boast. Whatever it is, Chile is here and I am PUMPED.

I’m really proud of everything that’s on the menu for Chile, especially the Brazo de Reina! I will admit, though…. I had a significant Chilean failure.

One of the national dishes of Chile is curanto, a stew made of seafood, pork, chicken, cabbage, mussels, vegetables and more. I wanted to try making curanto in my pressure cooker, and spent quite a lot of money buying ingredients, and even more time prepping them.

I put the curanto in my pressure cooker and 25 minutes later heard the familiar “ding” indicating that the food was done. But… my curanto… It was just so… bland! There was nothing exciting about the soup at all!

I was so frustrated at the end product and so sad that I had spent so much money on something so boring, that I decided I just wasn’t going to make another curanto. So, I’m so sorry friends, but we are curanto-less this week. Perhaps one day I’ll try to tackle that dish again…

The rest of the menu items from Chile were a hit, and I’m excited for you to try them!

Let’s Learn about the Flag

The Chilean flag looks very similar to the Texas flag! It contains a large red stripe across the bottom to symbolize the blood of the people that fought for the country.

The blue on the flag symbolizes the water and the sky, while the white on the flag resembles the snow on the top of the Andes mountains. The star represents a guidance towards progress.

If you look on a map, you will notice Chile’s very unique shape. The country is incredibly long and almost extends down the entire Southwestern coast of the South American continent.

In fact, Chile’s distinctive shape makes it the longest country in the world, and it is 18x longer than its widest point.

Chile extends through many climates and landscapes in South America, including the Andes mountains, the Atacama desert (which hasn’t received a drop of rain since people started recording rainfall), and the Central Valley, which has a Mediterranean-like climate.

In addition to this land mass, Chile also owns a section of Antarctica. You may be surprised to learn that Chile owns as Easter Island, the polynesian island most famous for the stone carvings called the Easter Island heads. Though Easter Island is the most prominent, the country owns over 2000 additional islands.

The Capital of Chile is Santiago, which is located about halfway down the country.

About 90% of Chile is made up of Caucasians and Mestizos (mixed race). Most Chileans are a combination of Spanish lineage and indigenous blood!

Over the course of its history, immigrants from Germany, England, Spain, Italy, Ireland, and Croatia have traveled to live on Chilean soil. Because of this, Chile is considered more “caucasian” than many of the other South American countries.

Prior to the influx of Spanish immigration, Chile was home to many indigenous tribes. Now, the largest tribe to remain is the Mapuche tribe, which contains about 600,000 individuals.

The Mapuche people feel strongly that their land was taken from them, and often participate in protests– and even sometimes hunger strikes– to fight this. The Mapuche are slowly starting to immigrate into everyday Chilean business, etc.

Spanish is Chile’s official language, though the Mapuche speak both Spanish and Mapudungun.

History of the Country

Archaeological discoveries indicate that Chile has had inhabitants as far back as 14,500 years ago. We know far more, though, about the Chinchorro culture, which ranged between 7,000 and 500 years ago.

From studying the bones and mummies we have found from this time period, scientists infer that many of the Chinchorro men went deaf from diving for shellfish.

With such a long coastline, Chileans are bound to become experts in seafood. Empanadas are popular as is lomo a la pobre– beef topped with fried eggs and potato chips.

Curanto, a very popular stew that includes fish, shellfish, cabbage, pork, chicken and more, is the national dish. My attempt at curanto did not go well, so I might have to revisit another time.

Chileans care about their wine as much as Italians, French and Californians do! Pisco is the most popular wine in the country and is one of the main ingredients in a pisco sour. This cocktail is a grape brandy served with lemon juice, egg white, and powdered sugar.

An average Chilean work day begins at 9 am and ends around 7 or 8:00 pm. Breakfast is served before work and is normally something small like toast and tea.

Lunch is the largest meal of the day and includes a starter (soup or empanada), a main course, and dessert.

An afternoon tea called “once” is served. The name (meaning “eleven”) has a few different origin myths. One theory suggests that tea is called “once” because it is similar to British tea, which is normally served at 11 am.

The other theory is that Chilean miners would secretly put aguardiente (an alcohol) in their tea. Aguardiente has 11 letters and therefore the miners began calling their tea “once”.

Consistent with European dinner times, dinner in Chile is very late, being served between the hours of 8 and 10 pm.

When invited to a dinner party, it is normal to arrive 15 minutes late and eat everything with a fork and a knife (no finger foods).