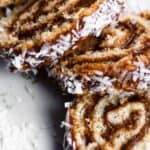 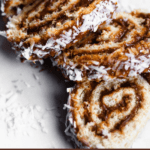 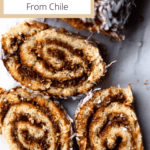 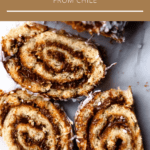 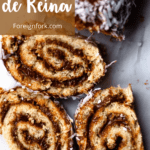 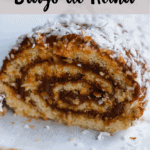 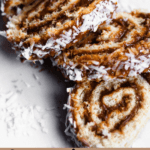 This special dessert, called Brazo de Reina, is a wonderful fusion dessert inspired by both Europe and South America. A thin sponge cake is spread with dulce de leche filling and then rolled into a spiral and topped with coconut. Keep reading for instructions and tips about how to make this yummy and impressive dessert!

What is Brazo de Reina?

If my Spanish minor serves me correctly, I thiiiink that “Brazo de Reina” directly translates to “arm of the queen”. Someone that speaks better Spanish than me please correct me if I’m wrong, here.

Brazo de Reina is a thin sponge cake which is then spread with dulce de leche filling. Once you bake and fill the cake, roll it up tightly into a spiral and then cut into pieces from there. The slices then show the spiral interior of the cake, which adds a beautiful detail to this delicious dessert!

Where Does Brazo de Reina Originate?

Oooh this question is a bit harder to answer than you may have originally thought. This recipe for Brazo de Reina obviously comes from Chile, but…. Does it originate from Chile? The short answer here is no.

The longer answer is…

Rolled cakes are common across the world, in the United States, Europe, South America, and more. They go by different names in each of these locations, including Jelly Roll, Cream Roll, Pionono, and Brazo de Reina.

If you take a look at any of these rolled cakes, you will see that the basic concept is the same… a thin sponge cake coated with a delicious filling and rolled into a spiral.

A dessert of the same name is also made in Spain and is filled with Spanish cream, much like a custard. The filling in the Chilean rendition is oftentimes also called arequipe, though we know the product more commonly as dulce de leche.

What Ingredients are in Brazo de Reina?

My pantry is overflowing with every kind of flour, oil, vinegar, sugar, and canned food you can think of. That being said, I have to be selective with what I choose to add into my poor cupboard!

Caster sugar can be bought in stores, but it’s so simple to make at home that I never invest in buying it pre-made!

Add your sugar into a blender or a food processor and pulse one or two times. Do not over-blend your sugar or it will turn into powdered sugar instead! In the brief moments between when your granulated sugar becomes powdered sugar, it will transform into superfine “caster” sugar.

What Type of Cake is in this Recipe?

This brazo de reina recipe, and most other rolled cakes recipes, are made with sponge cake.

How Do I Make Sponge Cake?

This was the first time that I had ever made a recipe for sponge cake, so it took quite a bit of research to get the recipe right. I’ve learned that sponge cake is not normally made with a leavening agent like baking soda or baking powder.

Every once in a while, baking powder is added to allow the cake to rise, but normally sponge cake is reliant on something different…. Eggs!

In this recipe, egg whites are whipped until they form stiff peaks. Adding these egg whites into the cake batter introduces a leavening agent to the cake, which allows the cake to rise.

How to Roll a Cake Roll

If you’ve ever watched a good episode of The Great British Baking Show, you’ve heard Paul Hollywood discuss the importance of a tight roll on swiss rolls.

Rolling your Brazo de Reina tightly is imperative for a beautiful cake roll! There are a few steps to properly rolling your sponge cake while making this dessert.

Once your cake is baked in the oven, let it sit for 5 minutes and then immediately transfer the cake from your baking pan onto a dish towel. Roll your Swiss roll tightly into the dish towel while still warm.

Allow the cake to rest, rolled in this shape until it cools completely. Then unroll the cake, spread the dulce de leche, and re-roll.

If you let your cake cool completely before trying to roll it, the cake will crack and break. By rolling the sponge cake while it is warm, you effectively give the cake “muscle memory.” The elasticity in the warm cake allows the dessert to roll without breaking. Then, when re-rolling the cooled cake, it will want to assume its previous shape, allowing the cake to roll once again without cracking.

What Fillings Should I Put in My Brazo de Reina?

If you are following tradition, your Brazo de Reina should always be made with dulce de leche filling. However, if dulce de leche isn’t quite your thing, you can fill this cake with almost anything your heart desires: Jelly, cream, custard, lemon curd, or more.

If you choose any of these other fillings, I don’t think you could officially call your cake “brazo de reina”, but you can call it delicious.

How Should I Decorate my Brazo de Reina?

I’ve seen plenty of Brazo de Reina in my time (meaning over the last like… month and a half). Customarily, the cake is sprinkled with a thin layer of powdered sugar.

In the Foreign Fork version of this dessert, I have chosen a different approach. Once my cake is rolled, I spread extra dulce de leche on the top to cover the entire thing. I then sprinkle sweetened, shredded coconut on top of the cake, which sticks to the dulce de leche topping and decorates the entire masterpiece.

I love the extra texture and flavor that the coconut adds to the dessert, and would definitely recommend decorating your rendition of the dessert this way as well!

Did you like this recipe for Brazo de Reina from Chile? If so, make sure to check out the other awesome cake recipes on my blog:

Thanks for reading everyone! Make sure to check back for more yummy recipes from Chile. 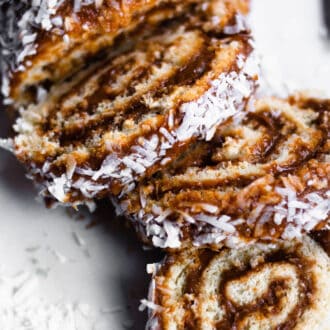 To Bake the Cake: