Everything you need to know about The Gambia including background, food culture, history of The Gambia, and popular recipes to make. 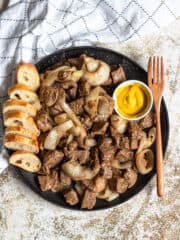 The Gambian flag is made up of thick and thin horizontal stripes, which, in order from top to bottom, are: thick red, thin white, thick blue, thin white, and, finally, thick green.

The red stripe represents the sun, especially in the savannahs of the country. The green symbolizes the forests of The Gambia and the country’s agriculture industry.

The blue represents the (very important) Gambia river, which physically divides the country in half. The thin white stripes that border the blue stripes represent peace.

One of the most interesting things about The Gambia is it’s geography. The country is bordered entirely by Senegal and the Atlantic Ocean. It is a thin and long country, being only 50 (ish) miles wide at its widest but 295 miles long. It is the smallest country on mainland Africa!

Because of its shape and location inside of Senegal, The Gambia is sometimes called the Smiling Coast of Africa. If you look at Senegal as the profile of a face looking west, you can picture The Gambia as a smile on that face.

The country is known for its beautiful beaches that attract many tourists each year.

It is a very conservative country with 90% of the inhabitants being Sunni Muslim and the other 10% being Christian. However, attire in the country is more laidback, and many women do not wear hijabs.

English is the official language of The Gambia but many tribes also have languages that they speak in, making most of the country bilingual.

Female sex tourism is a large part of The Gambia’s economy, especially from Britain.

The beginning history of The Gambia is largely unknown. We begin being more certain about its history during the 12th century, when the Ghana empire collapsed. At this point, there was a large migration westward, which led the Mandinka people to arrive in The Gambia.

The Gambia was part of the Mali Empire during Medieval times, and then in the 15th century the Portuguese reached the area.

The Portuese eventually sold trade rights on The Gambia river to the British, specifically as a way to find and sell gold. By 1820, Britain had declared the Gambia River a British protectorate, and in 1886 they adopted The Gambia as a crown colony.

The Gambia gained independence in 1965, and became a republic in 1970. Dawda Jawara was the first president, but his presidency ended in 1994. He was replaced by Yahya Jammeh. Adama Barrow is the newest president beginning in 2016.

Slavery in The Gambia

The Gambia was largely used as a country from which to collect slaves, with over 3 million people being taken as slaves from the region.

One of the most popular slaves to come out of the country is Kunta Kinte, a Gambian man whose journey into slavery is explored in the 1976 novel Roots.

In this novel, Alex Haley traces his family heritage all the way back to Kunta Kinte, a man that was taken as a slave from The Gambia. The book moves through the entire history of slavery in the United States and has since been made into a very popular mini series.

Slaves stopped getting taken from The Gambia around 1807, when the English abolished slave trade from the country.

Agriculture in The Gambia

Food in The Gambia

Much of the food in The Gambia comes from the Atlantic Ocean and the Gambia river, meaning that seafood is very popular.

Some of the most popular foods in The Gambia are:

The national dish of the country is Domoda, a groundnut stew made, consisting of groundnuts and available vegetables (usually pumpkin or sweet potatoes) and a sauce.