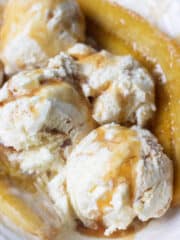 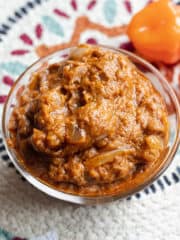 Ooooh Benin; what an experiment you were. I always get a little nervous when I get to African countries because it’s the type of cuisine I have the least amount of experience with. I’ve never stepped foot on the continent, I haven’t studied African countries a lot, and there aren’t many African restaurants in the suburbs of Michigan. So when I get to an African country, I get nervous because I have NOOOO idea how any of it is supposed to taste.

It took a lot of research to figure out what dishes come from Benin. It took more research to find those recipes in English. And it took even MORE research to figure out how they were supposed to taste. Luckily, I think I’ve got it covered. It took a few tries to perfect my Peanut Sauce and Bananas in Pineapple Sauce, but I finally have products that I’m happy with. Which means that I can’t wait for you to try them as well.

Benin is in West Africa. It was known as Dahomey in 1600, but has since changed its name. In between those years and its current state, it became a powerful country due to its slave trade. For a while, it was ruled by France, but it gained independence in 1960 and changed its name to The Republic of Benin in 1975.

Benin is considered to be the “cradle” of voodoo. The Beninese sing, dance to drum beats, and give offerings to fetishes. The voodoo,  however, does not have the negative connotation in Benin as it does in Western countries. Many citizens that also practice other religions practice voodoo as well and incorporate it into their rituals. Benin had banned the practice of Voodoo until the 1990s, but it is widely celebrated now. National Voodoo day is a national holiday that happens every year around the 10th of January.

People and Culture of Benin