I have been fascinated with Egypt for the entirety of my life. The idea of pharaohs, mummies, and even buried treasure has always just filled my heart with a sense of adventure.

As I’ve grown older, I’ve realized that the history of Egypt was probably another thing that excited me about this place. I was too young to realize that I loved history, but that was the truth… I loved that so many lives had been lived in this place. So many religions and belief systems practiced. So many lost moments of humanity, forgotten in the sands. Egypt, to me, feels like a mystery.

Egypt is old… Like really old. We’ve traced its history back to about 5000 BC, meaning that there is A LOT to cover in terms of history and culture. And there are plenty of books, articles, movies and videos that could do it a lot better than I.

For that reason, I want to give you some fun facts about Egypt but keep this article mostly focused on the food. It’s what I do best anyways. 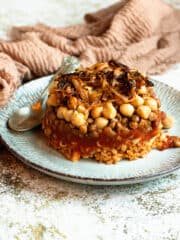 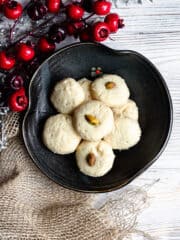 The flag of Egypt is made up of red, white and black stripes. At the center of the flag, the Coat of Arms is displayed!

The red on the flag stands for the hardships and struggles that the country endured during the Alawiyya Dynasty and under British rule, before their eventual revolution.

The white represents the years of 1952-1953 in which Egypt had a “bloodless” revolution.

Finally, the black stands for the end of oppression and a new era in the 20th century.

The most important feature on the flag is the Coat of Arms at the center, which is called the Eagle of Saladin (or the Golden Eagle). The eagle is holding a scroll in his talons that reads “The Arab Republic of Egypt”.

Egypt is in the Northeast part of the African continent, and rests between African and Asia. This means that it is a transcontinental country and the only Eurafrasian (Europe, Africa, and Asian) country in the world.

The Nile River runs through the country. It is the longest river in the world at over 6600 kilometers! It runs northbound and drains into the Mediterranean.

Because of Egypt’s lack of water throughout the country, 99% of the population lives on 5.5% of the land. Most of the people are concentrated around the Nile River Delta.

The country is made up of 90 million people, with 91% of them identifying as Egyptian.

The food in Egypt is influenced by the Middle East and North Africa, while also featuring elements of Greek and even French cuisine.

Popular ingredients in Egyptian food include beans, lentils, onions, ghee, and tea. Meat is eaten occasionally, but it tends to be pretty expensive meaning that it isn’t often found on the table. Popular spices include bay leaves, saffron, dill, coriander, and cumin.

Aish is another staple in the country. The word means both “bread” and “life”.

90% of Egypt’s population is made of Muslims, which means that most of the country follows the Muslim guidelines and expectations for eating. This includes not eating with the left hand (which is considered dirty) and not eating pork or alcohol.

When sitting down to eat home cooked meals (especially with guests) the first “course” of the meal is normally Mezze, which is salad and dips. By the time the guests sit down to eat at about 9 or 10 pm, the main dish is being served, which includes vegetables, soups, meat dishes, rice, etc.