Everything you need to know about Guyana including background, food culture, the history, and popular recipes to make. 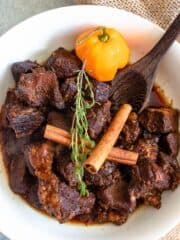 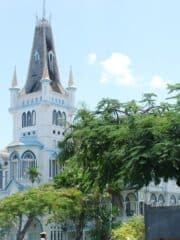 Guyana is located in the Northern section of South America, bordered by Venezuela, Brazil, and Suriname. It also borders the North Atlantic Ocean. The capital of the country is Georgetown.

Funnily enough, while Guyana is located on the South American continent, if you ask a Guyanese person, they will say they are from the Caribbean!

Guyana is the second most densely forested country in South America, after Suriname (almost ¾ of the country is covered in trees with a huge range of plants and animals as well!). In fact, that country is so forested, that most people live along the coastline, with about 90% of the population living on about 10% of the land.

Guyana also sits on a geological plain called the Guiana Shield, which forms flat topped mountains and raised earth. The tallest peak in Guyana is formed from this geological formation and is called Mount Roraima (also shared by Venezuela and Brazil).

The longest river is the Essequibo River, and is very important to everyday life in the country including trade and travel.

About 786,000 people live in Guyana, and the country is the second least populous sovereign state in South America, after Suriname.

The Guyanese emigrate frequently, and there are almost as many people living abroad away from Guyana as there are living in the country. Most of the people that move away are the ones that have received higher education (about 80%), making it difficult for the people of Guyana to advance in many industries.

English is the official language of the country, but many people also speak Guyanese Creole.

Guyana relies heavily on exports for its economy, and the country mainly exports sugar, rice, gold, and bauxite (the largest exporter of bauxite in the world is Guinea). Unfortunately, despite these exports, Guyana is still one of the poorest countries in the western hemisphere.

Recently ExxonMobil found oil off of Guyana’s coast ($41 billion worth to be exact). This discovery is looking to be hugely impactful on the economy of the country.

Guyana was first inhabited by Amerindians, including tribes such as the Wai-Wai.

In the 1580s, the Dutch arrived in what is now Guyana and began assembling trading posts. West African slaves were imported to the country to work for the Dutch on sugarcane plantations.

In the late 18th century, the British took control of the region, naming it British Guiana. Slavery was abolished in 1838, but the need for cheap labor did not go away. Instead, indentured workers from India were brought to Guyana to work the land.

These Indians eventually joined forces with the Afro-Guyanese descendents of slaves, as they collectively wanted better treatment by the government.

In 1953, Cheddi Jagan was elected as the first Chief Minister. The British were worried, thinking that Jagan had communist sympathies, and they attempted to put a stop to his power.

On May 26, 1966, the country gained independence! Forbes Burnham became the first Prime Minister, but became an authoritarian leader and tried to bring socialism to the country. He died unexpectedly in 1985.

After his death, Desmond Hoyte took over power and succeeded in implementing some democratic values.

Ever heard the term “drinking the Kool-Aid”? This phrase was coined after the mass death in Jonestown, Guyana in 1978. The “Jonestown Massacre” occurred when 909 Americans were convinced to kill themselves by their cult leader, Jim Jones.

Jones convinced his cult following to drink cyanide-laced fruit juice, which resulted in the single-largest death of Americans by a non-natural disaster at the time (and held the record for this title until September 11, 2001).

To learn more about the incident, read this article by History.com.

Note: This event did not happen to Guyanese people, as most of Jones’s followers were Americans. But it did take place in the country.

Georgetown is a combination of Caribbean, Indian and European cultures, which results in an incredibly interesting cuisine. The origins of Guyanese cooking come largely from the Amerindian people.

Cassareep is a unique ingredient in Guyana made from bitter cassava roots. Bitter cassava is a dangerous product as, unprocessed, it contains cyanide. However, cassareep processes the vegetable in a way where it can be used to flavor and preserve food. The national dish of the country is Pepperpot, which gets its main flavor from cassareep.