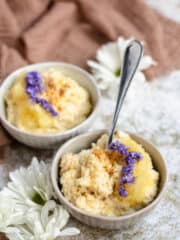 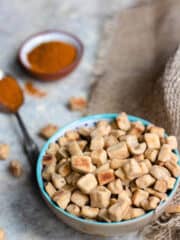 For delicious recipes from Democratic Republic of the Congo, visit the linked recipes under “On the Menu” below.

Our history books in school very frequently detail European, Asian, and North American conflict. We spend years in World History learning about these regions colonizing, growing, and fighting one another.

It wasn’t until my deep dive into Congolese history that I truly recognized the lack of African history in my classes growing up.

The majority of this “country introduction” details the painful and trying history in the Democratic Republic of the Congo, as I think it’s important to honor the pain that this country has experienced throughout its recent history.

Cooking the food of DRC has been an adventure, and I am excited to continue learning about the country over the next few weeks!

The flag of DRC is blue with a yellow star on the left side. A large yellow stripe runs diagonally across the flag with a smaller red stripe inside.

The blue signifies peace, the yellow signifies wealth, and the red signifies the blood of the people that fought for the country.

The star represents the radiant future of the country.

The People and Land of DRC

Democratic Republic of the Congo is the 11th largest country in the world, the 2nd largest in Africa after Algeria, and is home to 70 million people. Over 300 ethnic groups exist in the country, each speaking their own language. But French is the official language of DRC.

The country is divided into 5 regions: Western, Congo Basin, Kivu, Kasai, and Katanga. It’s home to the second largest rainforest after the Amazon: The Congo Rainforest.

The country holds an estimated 25 trillion dollars of untapped minerals and ores. Many resources call the Democratic Republic of the Congo one of the “poorest, richest countries in the world.” If the country could tap into the minerals properly, its wealth would grow tremendously. However, due to corruption and lack of leadership, the country has continued to struggle and 54% of people don’t even have access to clean drinking water.

The Terror of King Leopold

King Leopold of Belgium colonized Congo in 1885 and personally ruled it. At the time, it was called the Congo Free State. It is important to note that Belgium did not rule Congo Free State, King Leopold did. This meant that he did not need approval or regulation on how he chose to rule the country.

Leopold forced the Congolese into slave labor, collecting rubber that supplied growing demands for bicycle and automobile tires. The soldiers in charge of enforcing this slave labor had to fulfill a quota to show that they were enforcing policies. The “currency” of this quota? Amputated hands.

An estimated 10 million people, half of the 20 million population, died during this time.

In 1908, the Belgian government forced the king to end his rule over the Congo Free State. It then transitioned to a Belgian colony and was called Belgian Congo.

In 1960 the country gained independence from Belgium, and in 1965 Mobutu Sese Seko staged a coup that took control of the government. 1970 the country elected Mobutu president and he changed the country’s name to Zaire.

Mobutu initially was good for the country, building the economy during a copper boom, implementing hospitals, and also implementing a state television system.

However, after the Vietnam War, the value of copper crashed and Zaire fell into debt. Mobutu’s rule became a reign of terror, and eventually, Mobutu was forced to resign by outside forces.

The African Wars and Laurent Kabila

In 1997, Laurent Kabila was sworn in as president and renamed the country the Democratic Republic of Congo. Eventually, he expels Rwandan refugees from the country (a silly mistake, as these refugees are what helped him gain his power.)

Local militias started fighting Rwanda and Uganda over access to the natural resources, then these local militias began fighting each other. These years are sometimes called The African Wars. 5.5 million people died, making it the most deadly world conflict since the Holocaust.

To learn more about this conflict, watch this great YouTube video by Crash Course!

Fufu, a paste made from cassava, is a popular way to enjoy meals. People will roll the fufu into balls and dip it in popular stews or sauces to soak up the flavor.

The Congolese also eat fruits (mangoes, etc) as well as bushmeat and fish. Goat is the most widely-consumed meat. Meat can be expensive, though, so many meals are meatless. The Congolese often use mushrooms in place of meat! They also eat insects, such as grasshoppers. Subsistence farming is very popular, and most of the Congolese eat what they can grow.

Unmarried women in Democratic Republic of the Congo will open Nganda restaurants, which specialize in the local food of the region. For example, Kasai nganda serve goat meat and rice, whereas riverside nganda serve fish!