For delicious recipes from Democratic Republic of the Congo, visit the linked recipes under “On the Menu” below.

The República del Ecuador literally translates to the Republic of the Equator because Ecuador rests directly on the equator!

Ecuador is a fun and delicious country to learn about with beautiful wildlife, amazing people, and some of the best food around! 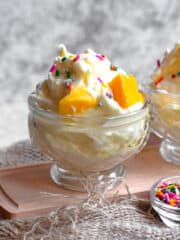 How to Make Espumillas from Ecuador at Home

Ecuador is actually a fairly small country, only being about 660 km wide. At the furthest points (that are still accessible), you can take “long distance” bus rides that are only about 5 hours!

Ecuador is made up of 4 different geographical regions:

Yes, you read that right! The Galapagos Islands are owned by Ecuador. You might remember these as the small islands where Charles Darwin first uncovered and studied evolution.

This was an easy place to do it, as Ecuador is the world’s most biodiverse country per square kilometer than anywhere on earth.

Ecuador has a population of 17 million people. Almost 72% of Ecuadorians are mestizo (meaning of mixed race). 7% of the population is made up of Indigenous tribes!

Indigenous culture is a large deal in Ecuador, with each tribe being distinguishable from the next by their clothing!

The mountain people are referred to as Serranos and coastal people are called monos.

Christianity (and the subset Catholicism) are the most popular religions in Ecuador.

Ecuador is abundant in 4 exports: oil, wood, flowers, and bananas. In fact, there is a 1 in 4 chance that the banana you ate today came from Ecuador!

Much of the food in Ecuador depends on where you are in the country. For example, people on the Coast eat a lot of seafood, and usually only people in the Sierra region eat Cuy (Guinea Pig).

Lunch in Ecuador is the largest meal of the day.

Some of the most popular dishes in Ecuador are: