Everything you need to know about the Dominican Republic including background, history, and popular recipes.

For delicious recipes from Dominican Republic, visit the linked recipes under “On the Menu” below.

How to Make Mangú from Dominican Republic 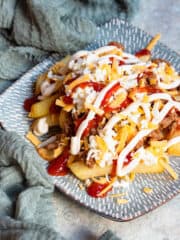 How to Make Yaroa Dominicana at Home

The official flag of the Dominican Republic features a white cross that passes through 4 colored rectangles. The top left and bottom right corners are blue, while the top right and bottom left corners are red.

The white on the flag symbolizes salvation, the blue represents liberty, and the red stands for the blood of the people that fought for the country.

The coat of arms of the Dominican Republic is very interesting! It features a shield bordered by two different branches, the bay laurel and the palm fond. There is a banner across the top that says “Dios Patria Libertad” (translating to “God, Fatherland, and Liberty”).

At the center of the shield, and thus the flag, sits a bible which contains the scripture John 8:32 in Spanish. This translates to “You will know the truth, and the truth will set you free”.

6 spears also emerge from the bible, and a yellow cross sits at the top of the flag.

Dominican Republic is located in the Greater Antilles region of the Caribbean. It shares the same island as Haiti though the two are completely different countries.

The Dominican Republic is the 2nd largest country in the Caribbean (by both landmass and population) and is the most frequently visited. It is divided into 31 different provinces, and also features its capital, Santo Domingo.

Dominican Republic, Cuba, and Puerto Rico are all friends with one another.

80% of the land is suitable for agriculture and this is where 70% of the population works.

The Dominican Republic has a population of 10 million people. It was the first country to bring Africans into the New world as slaves.

Because of this, about 73% of the population is of mixed race (which they call Indio). About 10% is white, and the rest are black.

History of the Dominican Republic

The Dominican Republic was “discovered” by Christopher Columbus in 1492. It varied between being under Spanish rule and being neglected by Spain. In 1795, Spain ceded the Eastern ⅔ of the country (then called Hispaniola) to France to compensate for their loss in the wars across Europe at that time.

From 1822-1844, Haiti took control of what is now Dominican Republic. A rebellion, led by Juan Pablo Duarte, used the outbreak of a Haitian Civil War as well as a devastating earthquake as a window of opportunity to gain independence for DR.

The country moved through a few presidents but continued a financial and social decline over the next 72 years.

In 1916, the United States took control of the Dominican Republic’s government. The US used this time to establish roads, schools, sanitation facilities, and other resources into the country.

In 1924, the US supervised a presidential election that resulted in the rule of Horacio Vásquez.

The country has transitioned through many leaders since this election and even the dictatorship of Rafael Trujillo, which lasted from 1930-1961.