Everything you need to know about Hungary including background, culture, history, and popular recipes to make. 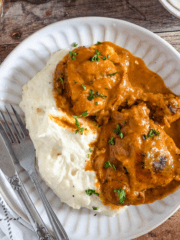 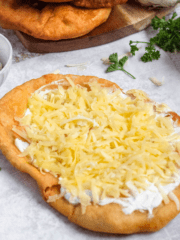 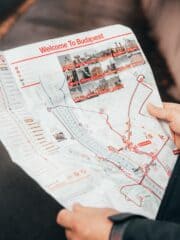 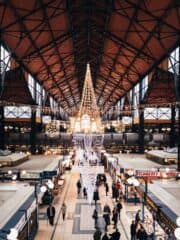 Hungarian Food: Everything You Need to Know

Hungary is a landlocked country in Central Europe, bordering Slovakia, Austria, Ukraine, Romania, Slovenia, Croatia, and Serbia. Its capital is Budapest, a city of 1.7 million people.

The Danube River, the second longest river in Europe, runs through the country, cutting directly through Budapest. Along with the many rivers in Hungary, the country’s landscape is also almost entirely flat, making it a great country for farming.

While Hungary is located in central Europe, most outside of the country associate it with Eastern Europe. Hungarians tend to identify as Central European.

The geothermal springs (and the resulting geothermal spas) are a large part of Hungarian life, especially in Budapest. They are made possible by the geothermal activity in the thermal basin that Hungary lies on.

Hungary’s history, like most of Central Europe’s, extends back centuries. The land was originally roamed by many nomadic tribes, including the Celts, the Germanic, and the Roman (14 BC – 430 CE) tribes.

The Huns invaded the country in 375 CE. It is from Hungary that the Huns based their assaults on the rest of Eastern Europe.

The Magyar Tribes, Christianity, and Louis the Great

In 895-896 CE, the Magyar tribes (believed to have originated from Siberia) crossed the Carpathian passes from the Ural Mountains and landed in current day Hungary. They were led by Árpád, who conquered and enslaved the existing Slavic tribes living in the land. Their descendents still live in Hungary today!

Eventually, the Magyars were conquered by German King Otto 1 in 955 at the Battle of Lechfeld.

Geza, Hungary’s leader reigning from the 970s to 997 CE, chose to align himself and his country with the Roman Catholic Church. In the year 1000, the Pope named Geza’s son, Vajik, as King Stephen, the first king of Hungary.

In 1241, Hungary was invaded by the Mongols and more than one million people were killed or enslaved. This invasion, however, was short lived and Hungary soon began to grow and prosper again.

Louis 1 (also known as Louis the Great) began ruling in about 1342, and he grew Hungary quite a lot by conquering previously owned and new lands. By the end of the fourteenth century, the Kingdom of Hungary stretched from Transylvania in the east to the Adriatic in the west.

The Turks and the Austrians

In 1526, the Ottoman Turks attacked and conquered Hungary when King Louis II was killed by Sultan Suleman I. The country was split into 3 parts:

Eventually, the Austrians took over the Ottoman territory.

The nineteenth century of Hungary was mostly shaped by two Hungarian statesmen: Count Istvan Szechenyi and Lajos Kossuth. These men reformed Hungary by modernizing the country and fostering nationalism.

This, eventually, led to the Hungarian Revolution of 1848. In this revolution, Hungarians almost succeeded in winning the war. That is, until the Austrians called into Russia for help, which quickly ended the revolution with an Austrian victory.

The Hungarians still wanted independence, so in 1867, the Compromise of 1867 was signed, transforming the Habsburg empire into the Austro-Hungarian monarchy. This granted Hungary full internal sovereignty.

This monarchy lasted until Archduke Franz Ferdinand (heir to the Austro-Hungarian Empire) was shot by a Serbian, Gavrilo Princip in Bosnia. This began World War I. The Austrian-Hungarian Empire, the Ottoman Empire, Bulgaria, and Germany banded together, but lost the war to the Allies.

The 1920 Treaty of Trianon removed more than ⅔ of Hungarian land and population, cutting off many of the Magyar descendents and their homes in what was previously Hungary.

In World War II, Hungary allied with Germany again, and lost the war.

János Kádár was appointed by the USSR to take power in Hungary. Though he was loyal to the USSR, he worked with the revolutionaries to improve the economy and standard of living in Hungary.

Communism fell and Hungary became an independent republic on October 23, 1989. It joined NATO in 1999 and the EU in 2004. Quality of life has continued to improve since then.

The 2020 census revealed that over 9.6 million people call Hungary home. About 86% of the population are ethnically Hungarian, 5% are Romani, and the rest are unspecified.

For fun, many Hungarians like to enjoy the thermal springs in the country (there are more than 1,000). They also enjoy soccer, water polo, and chess.

Hungarian is part of the Finno-Ugric language family. Though it is partially similar to Estonian and Finnish, it is still quite different, and many linguists consider it to be a language almost entirely disconnected from the other languages in the world.

Hungarians cling fiercely to their language and are determined to preserve it.

Visit the recipes above to learn more about Hungarian cuisine!

Cultures of the World: Hungary (by Cavendish Square Publishing)