Home » Africa » Ethiopia: Everything You Need to Know about Background, Food Culture, and History

Everything you need to know about Ethiopia including background, food culture, history of Ethiopia, and popular recipes to make. 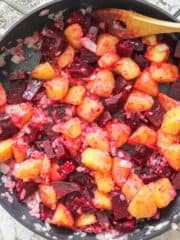 Beet and Potato Salad from Ethiopia 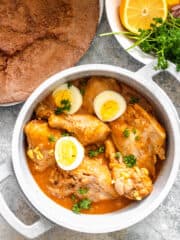 Ethiopia is a landlocked country in the horn of Africa bordered by Sudan, Eritrea, Djibouti, South Sudan, and Somalia.

Ethiopia used to have 13 provinces until 1996 but now there are 9 different ethnic-based regions. Each region is divided into zones which are then divided even further into territories called “woredas”.

Addis Ababa is the capital of the country, and is also the seat of the African Union. The name means “New Flower”.

The horn of Africa is located on the convergence of the Africa, Arabian and Somali plates. Ethiopia is right in the middle of all of it, and splits the country into two portions. The Northwestern side is the Ethiopian highlands (AKA the Ethiopian plateau) and the Amhar mountains.

Ethiopia is covered by mountains, desserts, and jungles alike. Dallol is the hottest human settlement on Earth with an average temperature of 105 degrees Fahrenheit (41 degrees Celsius).

Ethiopia has a population of 112.1 million people and is the 2nd most populated country in Africa.

Ethiopia also has the Habesha people, just like Eritrea! These are people that originated from the land of Kush.

Ethiopians claim they are descendants of King Solomon and the Queen of Sheba. Their son, Menelik I, became the first emperor of Ethiopia!

Some of the oldest specimens of modern day humans have been found in Ethiopia. Lucy, the oldest skeleton dating back 3.2 million years, is from Ethiopia!

D’mt (also Da’amat) was the first known settlement of the region, from 1000 BC to 400 BC. This civilization traded with Southern Arabia, selling things like ivory, gold and slaves.

As mentioned in the Eritrea article, around 1 AD, Aksum, an ancient civilization, formed with Eritrea as the northern province. By the 6th century, Aksum had fallen due to wars with Persia.

The Zagwe kingdom began around the 7th century and is best remembered for its infamous rock-cut churches.

As the 2nd World War began, Britain fought Italy, and Selassie participated in hopes of winning his country back. In 1941, the British were victorious and Selassie regained his throne! (This incident with Italy was not considered an “colonization” because Ethiopia fought the whole time and was never completely under Italian control.)

In 1952, Eritrea was added to Ethiopia, and was especially valuable due to its coastline on the Red Sea.

The Eritrean War of Independence began in 1961, and the Ethiopian Somali Border War erupted in 1964. A drought began, and trouble brewed in Ethiopia, with the people starting to turn on Selassie. (Despite the rastafarians of Jamaica regarded Selassie as the Messiah).

By 1974, a Communist takeover had occurred, and Mengistu Haile Mariam gained power as a dictatorship that lasted from 1977-1991. Red Terror, a period of oppression and mass killings, lasted from 1976-1978.

Then, in 1983 the Famine in Ethiopia began, with more than 1 million people dying from hunger. This famine lasted until 1985.

The 1990s showed brighter days for Ethiopia, with Eritrea winning its independence, communist rule ending, Mengistu fleeing the country, and democracy returning. In 1995, Meles Zenawi became the Prime Minister of the Federal Democratic Republic of Ethiopia.

Ethiopia is the only African country to avoid being colonized by any European outside forces. Italy tried to take over Ethiopia, but Ethiopia resisted, and won in the Battle of Adwa on March 1,1896.

Many countries have red, yellow, and green in their flag as a tribute to Ethiopia as it was the only Africa country not colonized. They are called Pan-African colors!

63% of Ethiopians are Christians, 33% are Muslims, and the rest are Jewish or of other indigenous faiths. That’s right! Ethiopia is one of the only countries with a black Jewish population.

The Ethiopian Church maintains that the Arc of the Covenant (the box said to hold the 10 Commandments) was brought to Ethiopian Orthodox Tewahedo Church and has been safeguarded there for thousands of years.

There is one person in charge of guarding the Arc of the Covenant, but he’s not even allowed to look and see if it’s really there.

Timkat is an annual festival that honors the baptism of Christ in the Jordan river! Many churches in Ethiopia have replicas of the Arc of the Covenant, so priests will remove them from the churches on this day and march them to the nearest water. Then a communal baptism takes place.

A lot of Ethiopian food is vegetarian! Shrio is a stew made with powdered chickpeas. It’s fully vegan and totally delicious!

Teff is the national grain of Ethiopia and is used to make Injera. Injera is a thin, crepe-like food and is used as a covering for your plate with all of your food being piled on top. Then, pieces are torn from it to pick up your food!

On Wednesdays and Fridays, all foods in Ethiopian restaurants are vegan in accordance with Christian fasting days.