Home » Interviews with Locals » Danish Food: Everything You Need to Know 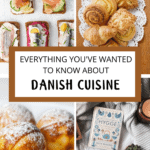 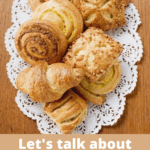 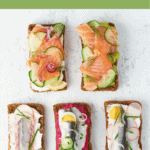 In November of 2019, I had the pleasure of meeting Jaughna from www.towhatplace.com. Jaughna and I had met at the 2019 Saveur Blog Awards in Cincinnati, Ohio where I was introduced to her incredible food and travel blog (that won two awards in her category!!).

Jaughna currently lives in Copenhagen Denmark, and sat down today to speak to me about the  culture, lifestyle and food in Denmark. Keep reading to learn about the incredible country of Denmark!

Tell me about your experience with Denmark. Did you grow up there?

I grew up in the US Virgin Islands. We’re now American but 100 years ago we were Danish; we were a Danish colony. Many of our street names are still in Danish and we still have quite a bit of traditional Danish colonial architecture. Even my last name is Danish because my mom’s great grandparents immigrated over from Denmark to the Virgin Islands, so I always had a tie to Denmark.

I never had any intention of moving here, that was never really in my plan. But, when I was living in East Africa I fell in love with a Dane. We moved here about 4 years ago to Copenhagen!

I know you didn’t go to school in Denmark, but I’ve read so much about forest preschools… Do you know much about them?

Kids go to forest preschool before they start 1st grade, so it’s the equivalent to Pre-K and Kindergarten in the United States. Essentially, it’s just learning in the forest!

There’s a designated spot where you drop the kids off every morning, and then they go to different places in the woods every day. They have different missions, some days they’re foraging and the next they’re learning about trees. Rain or shine, they will be out in the forest!

Denmark is considered one of the happiest countries on Earth. Do you find this accurate? If so, what do you think contributes to this?

In a previous life I worked in public health, so I definitely have questions about what exactly they’re trying to measure.

I would say it’s generally accurate though, and probably for two reasons. One would be the cultural aspect. Danes and Scandinavians in general, particularly compared to Americans, have more of a relaxed attitude towards life. They seemed more satisfied with what they have and what they’ve achieved. There’s not that same, “go get ‘em” “keep grinding” American attitude.

The other thing I would say is economical… Danes  don’t have medical debt and they don’t have large amounts of student loan debt. As an American it’s hard to imagine what life would look like if we didn’t have student loan debt. But in Denmark, if you want to be a firefighter, you can be a firefighter and pay your bills. You can do what makes you happy. There’s not the same pressure to have the highest paying career.

What are your favorite holidays or festivals in Denmark? Do you have any favorite foods that pair well with these traditions?

The big eating holidays are Christmas and Easter. Christmas is celebrated on the 24th here, and it can be up to 3 days of eating that starts on the 23rd.

On the first day, the 23rd,  we eat flæskesteg lamb, and it’s a nice evening with a fireplace going and candles lit.

Then the 24th is our large meal. We have duck and we also eat two kinds of potatoes: normal potatoes and then a sugary, caramelized potato. We also have a brown sauce as well as pickled cabbage. These are these five core things that are always on the table on the 24th and everyone has them.

One of the men in the family might dress up as Santa and we hold hands and dance around the tree. We also open presents on this day!

Then on the 25th we have a cold Christmas lunch with herring prepared multiple aways, leftovers, and some soups.

What does Hygge mean? How do you incorporate the concept into your life? And how do I pronounce it?

There’s no great translation, though if you translate it directly, it will often say “coziness” in English.

Hygge is a state of being, and you often feel it after having a nice, intimate time with a group of friends catching up with candles lit. It’s that feeling of being together.

Tell me about herring!

Herring is a small fish that is bigger than an anchovy but smaller than a mackerel. It has a lot of bones in it, which is why I don’t like to eat it.

Herring is definitely a cornerstone food in Denmark. We eat it at Easter and as a traditional Danish lunch. One of the most popular ways to eat it is to cure it with salt first, then pickle it. We have it fried, smoked, even in tomato sauce. It’s eaten quite a lot.

Danes eat smørrebrød  (open-faced sandwiches) when they’re having a traditional Danish  lunch, and those typically start with herring. (The next sandwiches could be more fish, then chicken and beef. A traditional lunch always starts with fish and ends with red meat.) If the sandwich isn’t already assembled, you’ll  get a basket of rye bread and then marinated herring. You butter the bread then put the herring on top with capers and red onions and then some garnish for color.

There’s also curry herring, which is that same marinated herring but in a creme fraiche curry sauce. You put that on rye bread too. That’s what is typically eaten for lunch for special birthday or anniversary meals!

What types of things are common for breakfasts, dinners, snacks?

Breakfast is normally granola or yogurt and a cup of coffee. Typically if you have kids you’ll have a lot of oats for breakfast.

Lunch is offered at work (maybe another reason why Danes are so happy!) in a subsidized cafeteria.

Denmark is a big pork and dairy country, so dinner is usually very simple and is some form of meat and potatoes (or takeaway like pizza, of course).

Desserts are usually whipped cream and then some kind of cake or fruit. Marzipan is also really big. For example, for New Year’s Eve Danes eat kransekage, it’s a cake made from stacked circular marzipan cakes with icing.

Are Danish Pastries as popular in Denmark as we would expect them to be?

The Danish that is eaten in the US is nothing like the “Danish” in Denmark. First, it’s not normally a breakfast food and, second, they’re never made with cheese or cherries.

The Danes then made these pastries their own, but the technique came from bakers in Austria. We have a lot of bakeries within a few mile radius of our house and they all sell the pastries!

What is the New Nordic Culinary Movement?

The New Nordic Culinary movement started about 20 years ago with a group of chefs led by Claus Meyer (who most people know from Noma, which was voted the best restaurant in the world).

It drew on the California farm-to-table movement of using seasonal ingredients, but it then employs Nordic or Viking traditions. It draws on seasonal ingredients and then presents them quite beautifully. There’s not a lot of seasoning in the recipes, but the movement is big on pickling or curing.

A lot of it draws on traditional Nordic food practices, like curing, pickling and making jams; the techniques that made food last through the hard winter months. It also features a lot of foraged ingredients.

What are typical snacks and junk food in Denmark?

Chocolate is big, so are  licorice and gummies. Licorice is the big divider. Supposedly if you live here long enough, you acquire a taste for it, but I have yet to have that happen.

Is there anything eaten in Denmark that’s not eaten anywhere else in the world? Anything surprising?

I would say no because there is a lot of overlapping traditions with Northern Germany, Sweden, Iceland, and Norway. But I definitely think no one does a pastry like the Danes.

Are there any ingredients that you love that just aren’t the same unless you’re in Denmark?

I’ve gotten really fond of the rye bread! It took some time, and I didn’t like it at first. It’s kind of sour and has a bit of a bite to it, but that’s due to the rye here.

The rye in Denmark is really good, which is also why the whisky has gotten so popular.

The smoked fish is pretty fantastic too.

What’s your very favorite recipe from Denmark? What is your least favorite food that is traditionally Danish?

Starting with my least favorite, that would have to be licorice. I also really want to like herring but it hasn’t happened yet.

My favorite Danish recipe is a cake that my partner’s mother makes. It’s a nut cake with layers of freshly whipped cream and fruit. It’s not too heavy and not too sweet but the nuts give it a really great flavor.

After we left Tanzania, we moved to Lima, Peru. My partner had a job and I didn’t, and I was going a little stir crazy waiting for my visa, so I spent a lot of time meeting friends and brushing up on my Spanish. The food in Lima is fantastic and one of the main things to do there is eat. As my Spanish started getting better I started hanging out with the abuelas and asking questions about food.

Whenever I’ve moved I’ve learned that before I could even talk to people, food was a gateway into cross cultural interactions. So, I decided to start writing about it!

My blog is an Expat’s perspective on traveling, with a focus on experiencing a country, or culture, through food. I’ve featured food articles from Tanzania, Peru and Denmark (the countries that I’ve called home)  and countries I’ve recently traveled to like Morocco, Colombia, Thailand and Croatia.

If you liked this article, you might also like these articles I picked out just for you: