Pispili is an Albanian dish that consists of cornbread filled with leeks and, in this case, feta cheese. It is common in the rural areas of Albania and can be served as either a main course or a side dish.

When I think of cornbread, I inevitably think of Cracker Barrel.

Ya’ll know Cracker Barrel, right? Old Western themed, southern style food? Off of pretty much every exit on I-75? Great cornbread? Yeah, you know the one. Whenever my family goes on a road trip, we stop at Cracker Barrel. My favorite is always the “Chicken n’ Dumplins” with a biscuit and honey on the side (P.S. Have you ever put butter and honey on your biscuit? You should do that right away.)

My brother, on the other hand, religiously orders the cornbread. For my entire life growing up, I would try his cornbread every time, but I never loved it enough to order it in place of my biscuit. Cracker barrel probably has the best cornbread I’ve ever had, but I still wasn’t sure if I was a TOTAL cornbread fan.

To be honest, it kind of weirds me out that something made with corn, a savory food (normally), is sweet. That’s why this Albanian cornbread (Pispili) recipe is perfect; it’s savory! And it has feta cheese! Definitely a win in my book. In Albania, is used quite often and leeks are very popular, so this dish is a great way to get a true taste of the country.

At first I tried to make my own recipe for this cornbread, but I got some ratios wrong and ended up using too much corn flour. The resulting bread was dry and crumbly, and not really the nice, moist taste I was going for. I’ve never made cornbread before, especially not savory cornbread with leeks, so I knew that I needed to get some help on my baking.

I looked at When Feta Met Olive’s site for some inspiration. As it turns out, the recipe that I had made up was pretty much the same as the one posted on their site, except for the mistaken corn flour proportions. I was pretty proud that, other than my flour mishap, I was able to make up a recipe that could have worked!

So I put together When Feta Met Olive’s recipe, and, low and behold, we had a winner. I did add some green onions because they added a little extra oomf to an already delicious recipe. I am so excited to keep learning about baking techniques and ingredients so that I can make up more of my own recipes as we go! 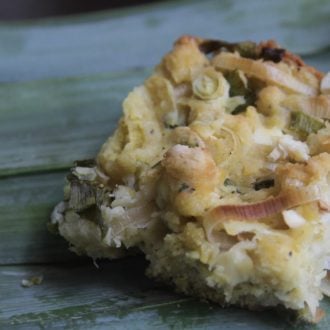 Recipe adapted from WhenFetaMetOlive.com
Tried this Recipe? Pin it for Later!Mention @TheForeignFork or tag #TheForeignFork! 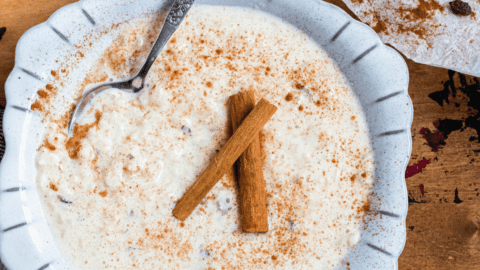