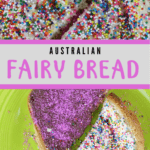 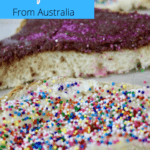 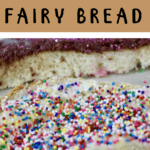 Fairy Bread is an Australian dessert treat made with bread, butter and sprinkles. It is served on birthdays and is a favorite among the children in the country!

Hello Reader! I try my hardest to research recipes as best as I can before posting to ensure I am representing each culture correctly. If this recipe is from your country and I have made a mistake or you have suggestions for how o make it more authentic, I would love to hear! Please leave a comment below letting me know what should be different, and I will rework the recipe. It is always my intention to pay homage and respect to each cultural dish that I cook. Thanks for reading!

Normally, when I think of birthday parties from my childhood, a few staples come to mind. Pizza, of course. A bounce house, most of the time. A circle to watch the birthday girl open her presents. And, the most obvious of all, cake.

Every party had a cake. I mean, was it even a birthday party without one? Sometimes, you might have been able to squeeze by with cupcakes, but even that was frowned upon. A big, store-bought cake decorated with swirly writing and mounds of sugary frosting flowers. That’s what made a birthday a birthday.

But if you ask a kid from Australia what flavors define a birthday celebration, the paramount answer is fairy bread.

“What’s fairy bread?” you may ask.

Take a slice of the cheapest, most processed white bread that you can find. Slather it with a thick layer of butter. Dump mounds of sprinkles (AKA jimmies AKA Hundred and Thousands AKA a crappy excuse for an ice cream topping– sorry not sorry) on top of the buttered bread. Cut the bread into triangles.

TA DA! There you have it, folks. The epitome of the Australian birthday. The indulgent dessert to triumph over all other confectionary delights.

Fairy bread is a fundamental necessity at an Australian birthday party. Instead of baking a cake, Australian parents make this recipe as a treat for their child!

What Ingredients are In this Recipe?

Why is it Called Fairy Bread?

There are a few myths as to where the term “Fairy Bread” comes from, though no one actually knows for sure.

First of all, “Fairy Bread” was the name of a poem written by Robert Louis Stevenson in A Child’s Garden of Verse, published in 1885.

Later, the Hobart Mercury, an Australian newspaper, wrote an article about the child inmates at the Consumptive Sanatorium. The article stated that they would be eating Fairy Bread and butter covered in 100’s & 1000’s.

It may be more likely that this second example is where the actual name for the food came from, as it describes the food in detail. It seems, though, that the Hobart Mercury was describing the actual bread as Fairy Bread, and not the dessert itself.

When my parents and I first looked at the concoction I had made, we thought “hm… maybe the flavors of this combination will blend together to make an unexpectedly scrumptious treat.”

We each grabbed a slice of bread and bit out huge chunks of bread, butter, and sprinkles. Turns out, it tastes exactly how you would expect. Close your eyes and eat a bite and you will very easily be able to guess that you’re consuming bread with butter and sprinkles. I’m not sure that I would ever choose to eat this dessert, but it definitely didn’t taste awful.

What Makes Fairy Bread So Special?

If I had to wager a guess, I’d say that the draw of this dessert is the nostalgia that accompanies it. I mean, a store-bought grocery store cake wasn’t the best dessert we’d ever tasted, but a birthday wasn’t the same without one. And now, eating a slice of Kroger cake to this day reminds me of childhood bliss.

I think this is the beauty of fairy bread, too. The dessert transports Australians back to the simplicity of childhood. It carries them back in time, to a period when the biggest joy in life was a piece of Wonder Bread covered in sprinkles.

What is Fairy Bread Day and How Did it Start?

The first Fairy Bread Day didn’t occur until 2014. The founder of the holiday ate a bite of fairy bread and decided it was too special not to celebrate. That’s all there was to it!

Did you enjoy reading about this Australian birthday tradition? Then you might like these other popular desserts from countries around the world: 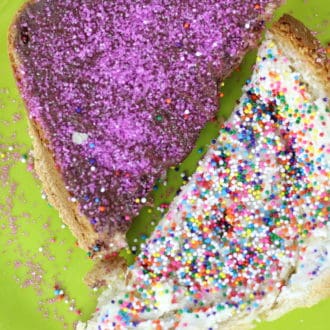 Fairy Bread is an Australian dessert treat made with bread, butter and sprinkles. It is served on birthdays and is a favorite among the children in the country!
5 from 1 vote
Print Pin Rate
Course: Breakfast, Dessert, snacks
Cuisine: australian
Prep Time: 5 minutes
Cook Time: 0 minutes
Total Time: 5 minutes
Servings: 4 servings
Author: The Foreign Fork

Recipe copyright The Foreign Fork. For educational and personal use only.
Tried this Recipe? Pin it for Later!Mention @TheForeignFork or tag #TheForeignFork!