Home » Interviews with Locals » Australian Food: Everything You Need to Know 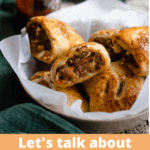 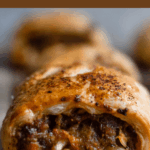 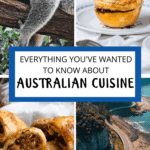 Cooking Australia a few years ago was an incredible experience. Much Australian food is similar to food that I know well, but there is also so much that is different about it as well!

To learn more about Australian food, I interviewed Sarah from Wandercooks.com. Sarah is part of a duo (her co-blogger is Laura), and together they have traveled the world, cooking meals from across the globe.

Sarah is from Australia, and was happy to share some information with me about Australian food and the best ways to enjoy it.

I was born in Adelaide, South Australia and still live here now.

Growing up in Australia was lots of fun. We get a fair amount of hot weather and live near the beach, so I was very active as a kid and always playing outdoors. Usually I’d go swimming or bike riding with friends, play tennis and netball and sometimes play video games like Nintendo 64 and Gameboy.

School was fairly normal. I was a bit of a nerd who enjoyed learning and loved my time at school. It’s common to have both public and private schools in Australia. I went to a private all-girls school.

What are some common phrases in Australia that mean different things if you visit different English speaking countries?

‘No worries’ – No problem

Haha just a few that I probably say the most!

Christmas is one of my favourite times of year. We love gathering our families and cooking a big feast. Most popular on the dinner table in our house are prawns and oysters for entree, roast meat like pork and beef with a potato bake for lunch and then our famous pavlova meringue slathered in whipped cream and strawberries for dessert!

Tell me about fairy bread. Is it as well-loved as the rumors have it?

Haha! Fairy bread is more for kids, and usually found at kids’ birthday parties. But let’s face it, I think the adults secretly eat it as much as the kids do!

The recipe could not be simpler – it’s fresh white bread smothered in butter and sprinkles. Although, the topping is hotly debated amongst those making it – do you top with sprinkles or 100’s and 1000’s?

Also tell me about Vegemite. What is it?

The description sounds very unappetising but Vegemite is a yeast based spread that’s very salty and so dark it’s almost black. Depending on the person, it can be an acquired taste but it depends how you eat it!

The biggest mistake we see newbies do is spread it on bread as thick as peanut butter. This is a huge no, no!

My favourite way to enjoy Vegemite is on toast in the morning for breakfast with butter and just the lightest scraping of Vegemite across the top. Yum! (Here is a delicious recipe for Vegemite Pasta)

I’ve heard that more recently, Australians have begun exploring cooking with local meats such as emus, kangaroos, and turtles. If so, what is a food you’ve eaten that may surprise someone that isn’t from Australia?

I’ve never eaten emu or turtle! I wouldn’t even know where to get those meats.

Kangaroo is the only meat that is very slowly gaining popularity. You can buy kangaroo sausages and steaks at most supermarkets now, but usually no other speciality Australian meats at this stage.

There are some country pubs or higher end restaurants that do specialise in native meats – that’s where you may get to sample emu, camel or even crocodile.

I have eaten a kangaroo cheeseburger before – I thought it tasted just like a beef burger. I’ve also tried crocodile, but I was quite young and don’t remember the taste!

Tell me about Australian Food. What types of meat are common to eat? What vegetables?

Beef and chicken would definitely be the most popular. Popular recipes they’re cooked with would be spaghetti bolognese, chicken schnitzel, barbecues with steak and sausages, grilled chicken with salad, pasta bakes (or pasta in general haha) etc.

How much is Australian Food influenced by the cuisine of other countries, and how much of it originates directly from Australia?

A lot of Australian everyday cuisine originates from European influences, particularly the UK, Italy and Greece due to immigration in our parents and grandparent’s generations. Australian cuisine these days is now very multicultural with influences from all over the world.

What are your everyday Australian foods? What types of things are common for breakfasts, dinners, snacks?

A couple of common breakfast dishes would be Weetbix with milk, or Vegemite on toast, or eggs and bacon.

Snacks can be almost anything from chocolate and lollies (candy) to chips (potato crisps), crackers and fruit (when we’re feeling healthy haha).

What’s your very favorite recipe from Australia? What is your least favorite food that is traditionally Australian?

My all time favourite recipe is Chicken Schnitzel! Although that has German origins, it’s a very popular dish at Australian pubs. My favourite topping is mushroom gravy, though you can get it with a lot of special sauces these days.

Lambs Fry (a dish consisting of fried lamb’s brains) is my LEAST favourite food – luckily it’s not very popular anymore, but my parents definitely used to eat it.

Are there any ingredients that you love that just aren’t the same unless you’re in Australia?

We definitely put this to the test during our travels. While this is more of a snack than an ingredient, I’d say the hardest things to get would be Tim Tams (chocolate covered biscuits). They just do NOT taste the same overseas. (That’s only when we could find them too).

We didn’t have any trouble finding ingredients usually, there’s nothing in particular that we cook with that we couldn’t find overseas.

At one point after we first got together, we realised we’d managed to cook a different recipe EVERY SINGLE NIGHT for over 6 months. Our friends and family were astounded when we told them, and they encouraged us to create a blog and share what we’d learned. We’re so grateful they did, because now we get to share our favourite delicious creations with the world.

In 2015 we set off on the biggest adventure of our lives – in 12 months our mission was to discover new cuisines and recreate delicious world recipes from 100+ cities in 30+ countries.

Along our journey we stayed with locals as much as possible (Couch Surfing, or as we liked to call it: ‘Cook Surfing’) to learn a recipe or two and share our own in return.

Cooking and eating together is one of the best ways to learn about other people and cultures. But even if you can’t travel or don’t have time, you can bring the flavours of the world into your kitchen with a few tasty ingredients and a little know-how.

Our favourite Australian recipe on the blog would have to be our Pavlova. We cook it so often, and it never fails to impress!

Did you like reading this interview about Australian food? If so, you might enjoy reading some of the other country interviews I’ve posted! Make sure to check them out:

And here are a few Australian recipes for you to check out: