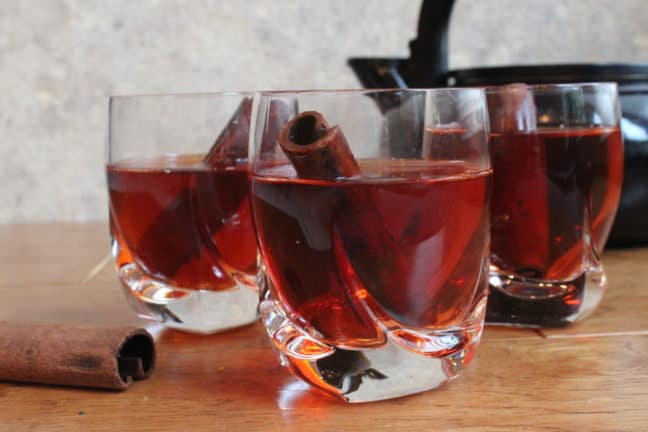 Cinnamon tea (Dartchinov Tey) is a quick and authentic way to truly taste Armenia. You only need sugar, water, and cinnamon bark to enjoy this classic drink!

I’ve recently been known to appreciate cozying up with a chai latte and I can get down with a good Cambodian Iced Coffee. But tea has never really been on my radar.

Drinking a warm, steaming mug of natural tea grants that same cozy feeling as coffee while also managing to avoid the jitters that follow. Plus, I can almost guarantee you that you’ll never pay $7 for a cup of Armenian cinnamon tea…

What Ingredients are in this Cinnamon Tea Recipe?

How to Make Cinnamon Tea

Fill a pot with water, drop in the cinnamon sticks and place on the stove.

Cover, bring to a boil, then simmer for about 15 minutes.

Pour into glasses with cinnamon sticks. Serve with sugar or honey if desired.

When Should I Drink Cinnamon Tea?

You can drink this beverage at whatever time of day you’d like. Admittedly, I’m not a big tea drinker, but the research I’ve done suggests that cinnamon tea is best to drink at night.

There is no proof that cinnamon tea will help you sleep, but it is good to consume at night as it can help with your metabolism, lowering cholesterol, etc. For more information on the health benefits of Cinnamon Tea, visit this page.

If you’d like to add a little milk or cream to your tea, you can absolutely do so! This will give you a creamier tea, that can have a calming effect.

If you’d like to add ice to your drink, you can do this as well! You can also soak the cinnamon bark alongside some black tea bags. This will give you both flavors in one drink to add a bit more dimension to your beverage.

For more delicious drink recipes from around the world, check out a few beverages I picked out just for you:

Water and cinnamon boil together to create this simple and enjoyable Armenian Cinnamon Tea! As cozy as a chai latte without the caffeine jitters that follow.