Home » Interviews with Locals » Austrian Food: Everything You Need to Know 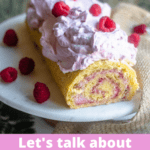 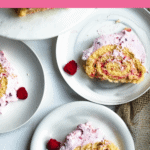 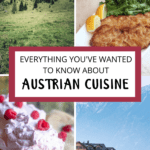 Austrian food comes from an incredible food culture, with delightful dishes that range from local specialties to global classics. The sausages in Austria are unlike that of any other country.

But don’t let Austrians fool you: Though they love their meat, Austrians also have a sweet tooth, and often sit down for a cake break in the middle of a long day.

Having visited Austria myself, I knew firsthand the delicious foods that could come out of the country. I wanted to hear how my food experience (as a tourist in Vienna and Salzburg) compared to that of a local.

I recently sat down with Helene, the food blogger behind Masala Herb, to ask my burning questions about Austrian food.

Helene was born and raised in Austria, and now spends about 6 months per year living in the mountains in Tyrol. She has a local degree for Austrian cuisine from a culinary school that focuses specifically on Austrian food.

Helene gave some wonderful insight in the background and food culture of her lovely country. If you have more questions for her or have your own thoughts on Austria, please leave them in the comments at the bottom of this post!

Tell me about your background with Austria. What was your childhood like growing up in the country?

I grew up in a town called St. Johann in Tirol. It’s located in the alps in Tyrol, next to the jetsetter city Kitzbühel and near Germany.

As kids we played mainly outside. In the summer we would help with hay work, in the winter cutting and stacking firewood neatly into rows. Austria at that time only had 2 TV channels and that’s also a reason why we all played outside.

In Austria, we go to school for 9 years and anything else is extra, which most don’t do. School starts at 7:30 am and we don’t have canteens so we would go home to eat and watch cartoons or a skiing race while we had lunch because they canceled cartoons. You ought to know, this country has a thing for sports!

Our town is one of the best places to be in Austria. It has all important stores, the valley has more sun then most places in the mountains, it’s got a relaxed attitude, people finally got used to foreigners and folks are creative and fun.

What is your favorite Austrian food tradition that you practice?

Traditions in Austria are usually heavily tied to catholic beliefs, but some are older than that. My favorite is held on the longest day of the year around the 21st June, when people go on the mountains and start a bonfire to mark the start of the summer.

My favorite memory around Austrian food is the Christmas season with all the wonderful cookies. Vanillekipferl are my favorite cookies.

What was culinary school like focusing specifically on Austrian cuisine? In what ways do you see the effects of the country’s history on Austrian food?

Austrian food is a fusion cuisine. This is because Austria has a rich history.

Before the 1st and 2nd world wars, it was a massive empire and other countries such as Hungary, Slovakia and Croatia, to name a few, were also part of the empire. So, the influence of these countries made Austrian cuisine what it is today. We still share many food traditions. i.e Apfelstrudel and Goulash with Hungary.

In culinary school you had to learn how to make a Wienerschnitzel, a Strudel dough, a Guggelhupf and a clear soup among other major specialties. We would prepare a lot of so-called Mehlspeisen (flour based specialties).

Spätzle noodles and dumplings, such as apricot dumplings are some of the many amazing flour based dishes from Austria.

Tell me about Austrian food. What types of meat are common to eat? What vegetables?

Meat is popular in Austria. We love our cold cuts and sausages. Pork, beef, veal, deer, turkey and chicken and the most popular meats.

Veal meat is a tradition and a classic Wienerschnitzel is made of veal meat, yet pork Schnitzel is common in West Austria (and also Bavaria, South Germany).

What are your everyday Austria foods? What types of things are common for breakfasts, dinners, snacks?

For breakfast people like to have a semmel bread slice with butter, jam or honey. You can also get pastries and those are popular breakfast takeaway foods with coffee.

Coffee is a big thing in Austria due to the Turkish invasions some 500 years ago. Coffeehouses are part of the Vienna flair.

Austrian homes often serve dishes such as meat goulash, sauerkraut and sausage, and hunter’s schnitzel. Italian foods have been part of Austrian homes for a long time too.

Do you eat anything in Austria that’s not eaten anywhere else in the world?

Austria is a multi-cultural food country so this one is almost impossible.

I love Semmel bread and I think it’s the most perfect bread out there.

What is your least favorite food that is traditionally Austrian?

I don’t like the savory thin pancakes cut into strips and placed into a clear soup like dumplings, also known as Frittaten.

Are there any ingredients that you love that just aren’t the same unless you’re in Austria?

Sausages and meats hands down! Nothing beats all those wonderful sausages such as frankfurters, wiener, St. Johanner, käsekrainer and knacker (to just name a few).

We also love our meat loaf. It’s different; we call it either Fleischkäse or Leberkäse. It’s a pressed flavored meat cut into slices.

You make a sandwich with it and add pickles, mustard, ketchup or chili peppers to it. Different flavors exist such as pizza, with cheese and hot spicy.

How often do locals actually participate in the coffee and cake tradition celebrated in Austria?

Whenever you visit someone at home you will serve up a coffee and cake in the afternoon. Cakes are usually sheet pan square cakes in local homes and they are made with apricots, plums or other fruits.

People also love to just go for a black coffee at a coffee house. Many different coffee varieties exist.

I started my blog when I was abroad. We live 6 months of the year in Goa, India. The name reflects that. Masala is for my husband’s food heritage, Herb stands for the European and Western point of view.

Did you like this interview about Austrian Food with Helene? If so, make sure to check out some of these articles and recipes that I think you’d really enjoy: