Home » Interviews with Locals » Czech Food: Everything You Need to Know 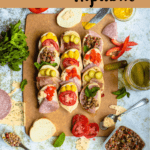 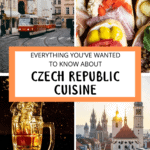 As I was researching for my upcoming weeks cooking Czech food from the Czech Republic, I stumbled across Kristyna’s blog, Czech Cookbook.

Kristyna is a Czech that was born and raised in Czechoslovakia. Years ago, she moved to California, where she struggled at first to recreate the wonderful dishes from her country! Kristyna began Czech Cookbook, where she recreates classic Czech recipes using US ingredients and the imperial measuring system.

It was so interesting speaking to Kristyna about life in Czechoslovakia, the fall of the Communist party, cooking Czech food and… mushrooming!

Keep reading for some great info on Czech culture and food, and also best practices for how to avoid poisonous mushrooms 😉

Tell me about your background with the Czech Republic

I was born and raised in the Czech Republic in the second largest city, Brno. I grew up here when it was still Czechoslovakia, so times weren’t as easy. They were different, but I wouldn’t change it for anything. We have great memories and it shaped us into appreciating things much more.

My parents were always trying to protect my sister and I. But for example, we didn’t have businesses. Everyone had to be equal with equal pay, and if you had a business on the side you would go to jail.

There were shortages of toilet paper. For us, bananas and oranges were so foreign and we would stand in line for hours before Christmas hoping that there would be some when we got to the end of the line.

Everyone wore the same clothes. The stores had the same jeans, the same shirts. If my mom ever was able to go to Hungary, she would get us new clothes and everyone at school would be so impressed!

You lived through the fall of the Communist Party in Czechoslovakia. What was that moment like?

It started with college students that had had enough and went to the streets. So many actors, singers, and celebrities joined the students on the streets and suddenly it was so big the government didn’t have control over it.

They had some beating and things like that, but the protests kept going, and more and more the government realized that they were losing their hold. It completely fell…

There was a guy, Václav Havel, that was writing about the regime and he had ended up in prison. He suddenly was the main speaker and leading the movement, and after it fell, he became our first president!

Everyone was excited when the Communists fell, and we were just free to travel and see the world. Suddenly our minds were open and we knew that there was something more. My first trip was Yugoslavia, but my first real trip was to Florida.

I read that mushrooming is an important family pastime in the Czech Republic. Have you ever gone mushrooming?

Mushrooming is a Czech obsession; it’s the biggest hobby. It’s so popular that you will see it on national news! It stemmed from the Communist times when we tried to be resourceful, and it became a nice hobby and so delicious.

It’s so extreme that I remember times of getting up with my grandma at 4 am and we would look for mushrooms with a flashlight, just so that we could beat everybody and be the first to find them!

How do you know what mushrooms to pick?

There are so many edible ones, but if I’m not 100% sure, I just stick with what I know. A good tip is that if a mushroom is partially eaten by worms, it’s okay to eat, because worms will not eat poisonous mushrooms. Normally, if you see a beautiful looking mushroom, just avoid it.

Tell me about Czech Food. What types of meat are common to eat? What vegetables?

The most popular meat we eat is pork and chicken. People also used to raise rabbits, so sometimes you might find rabbit in stores.

We do eat beef, but we’re not big on ground beef like in the US. We have a lot of lakes so we also have freshwater fish.

It is! I have people watching from Poland or Romania that eat the same dishes that I show in their country. The food is probably so similar because the countries are so close.

We also used to be part of the Austro-Hungarian Empire, so many of the dishes evolved from those times (like Hungarian goulash or langos), but we just make them our way now.

What holidays are popular in the Czech Republic?

My favorite holiday is, of course, Christmas. We also have New Year’s Eve, which is very big, but we don’t have a lot of holidays. We just have Easter, Christmas, and New Year’s Eve.

At Christmas we have breaded and fried carp or schnitzel paired with a potato salad. We might have Chlebíčky for lunch and then the larger meal for dinner.

I made Chlebíčky on my blog as well! Tell me about it in your own words.

Normally to make Chlebíčky, you use a white or a French bread and slice it. Then use either butter or a special spread, then layer it with ham, cheese, and toppings.

We try to make it very nice and decorated, and you can get as creative as you want. These are very popular for New Year’s Eve.

What are your everyday Czech foods? What types of things are common for breakfasts, dinners, snacks?

A normal breakfast would be a fresh bread with butter and jam or butter and honey. We might also have soft-boiled eggs or something sweet, like pastries or pancakes.

Normally we have big lunches but small dinners.

What types of desserts are popular?

Is there any Czech food that’s not eaten anywhere else in the world? Anything surprising?

Back in the day, we would eat pig’s brains. To me, it’s still a little strange because I didn’t grow up eating brains, but you can still buy it and make things with it. I think they scramble it with eggs? That is kind of strange, but we needed to use every part of the pig, so brains are part of it.

I have so many favorites, it’s hard to pick one. The most popular one is Svíčková na smetaně, also known as Beef Sirloin in a Cream Sauce. It’s a popular national meal specific to the Czech Republic. We created it, so no other country has it. I also love fried things, like mushrooms.

Are there any ingredients that you love that just aren’t the same unless you’re in the Czech Republic?

Because I’ve been doing this for so long, I don’t know if I can think of anything! I can make farmer’s cheese, dumplings… there’s nothing that I miss.

One thing I might mention is that there is a brie cheese that is round, and we like to bread it and fry it. If i’m in the Czech Republic that’s something I would go to a restaurant to get.

Tell me about the beer culture in the Czech Republic! Why do you think beer is so important to the country?

Beer is such a big deal in the Czech Republic that we are the number one in beer consumption per capita in the world. Below us is Austria and then Germany, and Austria only drinks half of what we drink.

I think it’s so popular because in many restaurants, it’s still cheaper than water. We call it liquid bread!

My food blog is czechcookbook.com. I started it in 2013. My site and Youtube channels have Czech side dishes, main dishes, Christmas dishes, and appetizers.

I realized that there is such a need for Czech recipes that aren’t in the metric system and aren’t in the Czech language, and I couldn’t find anyone that was doing what I’m doing. I share the things I struggled with at the beginning, like finding the proper flour or making certain foods.