Chinese Peking Duck is roasted in a roasting pan and brushed with plum jam to create a crispy, sweet skin and a tasty interior.

“Hello Reader! I try my hardest to research recipes as best as I can before posting to ensure I am representing each culture correctly. If this recipe is from your country and I have made a mistake or you have suggestions for how to make it more authentic, I would love to hear! Please leave a comment below letting me know what should be different, and I will rework the recipe. It is always my intention to pay homage and respect to each cultural dish that I cook. Thanks for reading!”

Making this peking duck was, without a doubt, one of the most daunting recipes on this blog to date. Not because it was actually difficult to make (news flash: it wasn’t) but because I was intimidated by cooking an entire duck. If you’ll remember, I felt this same way while learning how to joint a chicken during Bahrain.

In fact, the first time I bought the peking duck, I allowed it to thaw in my fridge for a few days before cooking it. I was so nervous to cook the duck that I put off the task until, unfortunately, the raw duck went bad and I had to throw it out (wasteful, I know).

Obviously I’m telling you this because all of my worry was for naught. For all of that stress, cooking a duck was actually so easy! It took a little bit of attention to detail during the last section of roasting when more basting was required. But other than that, it was simple. And came out seeming way more professional than the effort I exerted to make it.

When I was looking online, there were a lot of recipes for peking duck that didn’t include plum sauce. The plum sauce is actually my favorite part of this recipe, as it leaves the duck with a beautifully sweet taste.

You won’t need to make the plum sauce until your duck is actually in the oven. It won’t be brushed onto the duck until about a half an hour before the duck is done roasting!

What Ingredients are In This Recipe?

What Goes with Peking Duck?

A lot of people love to eat their peking duck with Chinese pancakes, often with cucumbers, cantelope, scallions, and hoisin sauce.  Peking duck is also delicious with citrus, and can be served with orange slices.

Did you enjoy this recipe for Peking duck? Make sure to leave a comment letting me know what you think! And don’t forget to check out these other poultry recipes on The Foreign Fork: 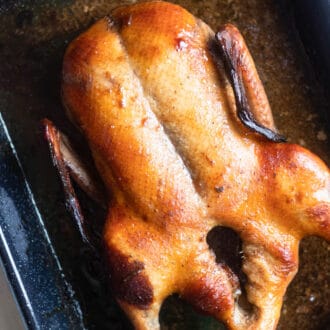