Home » Interviews with Locals » Brazilian Food: Everything You Need to Know 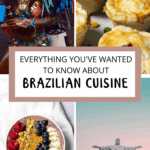 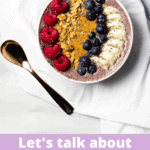 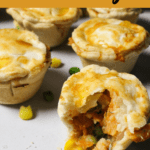 Over my time with this blog, Brazil has been one of my very favorite countries to learn about. I’ve met quite a few people from Brazil that have taught me about the beauty and culture of the country… And, of course, Brazilian Food! (You can read an interview I had with my Brazilian Uber driver here).

My favorite person to interview, though, has been Denise from Easy and Delish. Denise was born and grew up in Brazil. In adulthood, she moved to the United States and began her Brazilian food blog to teach others about the delicious recipes from Brazil.

Denise has had an impressive life, from being a lawyer in Brazil to graduating from culinary school in San Francisco, to representing Brazil in the United Nations! It was my pleasure to learn about her culture and her food, and I can’t wait to share this interview with you all as well.

What is your history with Brazil?

I was born and raised in Brazil. I immigrated to the USA when I was 29 years old because I married an American doctor.

Down there I was a lawyer and a happy foodie who cooked as a hobby. I was in the process of becoming a federal judge when my then American boyfriend proposed to me.  Since then, my life changed forever and has been an adventure full of ups and downs, but still worth it.

When you moved to the United States, what was the most surprising thing? What did you miss most about Brazil?

It took me at least 2 to 3 years to grow acustomed to the American culture and finally blend in. I confess, it demanded a big effort on my part. But things fell into place little by little with the help of my husband.

I missed everything: the language, culture, food and above all, my family and friends. But as the years passed, I was able to visit them and enjoy all the great things Brazil has to offer.

I have been in the U.S.A. for almost 2 decades, and consider it my home. Brazil became the place to visit family and friends.

I will always love my home country, but the United States has been my home for years. It is where my heart says to return to after some fun vacations in Brazil.

In Culinary school I learned cooking techniques and gained a broader knowledge of other world cuisines. I applied what I learned there to improve my cooking skills and of course, used all those techniques to cook the food of my country, to cook its dishes as a professional — not an amateur cook anymore.

On the other hand, I also used what I knew about Brazilian cuisine to trace parallels and create fusion dishes that incorporated Brazilian cuisine and another world cuisine. It also became easier to make ingredient swaps especially when certain Brazilian ingredients were not locally available here.

You have represented Brazil in the United Nations– tell me what exactly that means!

I was part of one of the United Nations’ last campaigns, the #actnow #climateaction campaign. Because my site became one of the largest Brazilian cooking blogs in the English language, I was invited to submit a vegetarian Brazilian dish that used natural-saving resources.

Well, I submitted two (giving them an option to choose one of two) and they accepted both. I was very proud to be the only Brazilian representing my country among well-known world chefs as well as the only one with two dishes featured in the same campaign.

Something really unexpected but that makes me smile every time I remember that moment!

At one point, the Portuguese settled Brazil. Do you see this history reflected in Brazilian Food?

Yes, absolutely! Besides our African and Native roots, Portuguese influence is the most notable one in food and culture itself.

There are many dishes adapted from Portuguese cuisine such as queijadinha, Portuguese kale soup (caldo verde), and feijoada itself — because they were our settlers.

There are others that we make straight from Portuguese cuisine (without modifications) such as Bacalhau a Ze do Pipo and quindim.

We also embraced and incorporated many of the ingredients that are key in the cuisine of Portugal such as the heavy use of eggs and also the tradition of eating codfish (bacalhau) especially on Easter.

Tell me about Brigadeiros and their importance in Brazilian cuisine.

Brigadeiro is the most simple chocolate fudge that one will ever make, yet the most iconic dessert in Brazilian cuisine. If I could make a comparison, I would say it is as important as apple pie in American cuisine.

It became a symbol and so, it is present in our everyday life as in many of our celebrations such as birthday parties. Brazilians love brigaderio so much that we created hundreds (literally) of variations of that famous “candy”. One of the most well-known is the family-size brigadeiro called brigadeirao. Brigadeiro is part of every Brazilian childhood too!

What is the best part about being from Brazil?

I think my people are in general very social and outgoing. They are not afraid of communicating their thoughts and feelings.  I am not an exception — and this skill has helped me during many occasions.

Tell me about Brazilian Food

Brazil has one of the largest flock of cattle in the world — and so it is the most consumed meat besides seafood due to our large coast.

We are also famous for our churrasco or barbecue made with many different cuts of meat, with picanha as one of the most well-known.

We consume a lot of local vegetables, especially root vegetables such as sweet potatoes, yams, and yuca.  As for spices, cumin is one of the most used in Brazilian cuisine while cilantro and green onions are the most common herbs.

What are your everyday Brazilian foods? What types of things are common for breakfasts, dinners, snacks?

Brazilians make heavy use of local fruits all year round. It is very common to have at least one type at breakfast time along with bread, cheese and/or eggs, tapioca crepes, and coffee or a fresh fruit juice — and also one at snacktime (the fruit by itself or incorporated into a fruit salad or smoothie). Acai bowls are one example of it!

Lunch is the main meal down there (instead of dinner) and also the heaviest meal of the day. It consists of one or more starches (most commonly beans and rice), one type of meat or seafood, and a fresh salad or cooked vegetables. Dinner usually either consists of lunch leftovers or something light such as a soup.

Is there anything eaten in Brazil that’s not eaten anywhere else in the world? Anything surprising?

Yes! The Northern cuisine of Brazil has several unique dishes that you don’t see anything alike in the world and also in the rest of my home country itself.

Maniçoba is one of them which consists of manioc leaves cooked for up to 7 days in order to remove cyanogens (which is poisoning) and then some beef and pork cuts are incorporated to the dish. It is known as feijoada of Pará. It can be compared to a feijoada but without beans.

What’s your very favorite recipe from Brazil? What is your least favorite traditional Brazilian Food?

This is a very hard question. I love so many dishes from there. One of the things that I usually miss is a fruit called pinha (sweetsop, sugar apple, or pine cone fruit) because it is very hard to find in the U.S.

As for dishes, I love a good cuscuz de milho (corn couscous) as an authentic nordestina (someone from Northeastern Brazil) that I am.

As for the least favorite traditional dish, I have no shame to say I hate buchada, a dish similar to Haggis from Scotland.

Are there any ingredients that you love that just aren’t the same unless you’re in Brazil?

Yes! In Brazil, our fruits are usually sweeter and fresher than the ones from the U.S. I found Americans receive unripened, exported fruits from Mexico that ripen in the grocery store. On the other hand, Brazilians consume most of what we plant, and most of the fruits grow locally.

My food blog started in 2012 under the name From Brazil To You. Four years later, I extended the concept to include other cuisines of the world. But all our recipes are easy to prepare! We focus mainly on healthy dinners and some scrumptious desserts because life is a balance.

I have plenty of easy Brazilian recipes  as well as traditional Brazilian food that are quite worth to try.  We also have several Italian, American, Tex-Mex (I live in TX and Texan pride consider it as a distinct cuisine), and Indian inspired recipes, among others. You are welcome to explore our recipe index!

I would love to invite everyone to take a look at our first ever published cookbook, The Complete 5-Ingredient Cookbook, available on Amazon both on Kindle and paperback . It contains 175 easy global recipes for busy people made with 5 main ingredients plus 5 (1-week) meal plans and plenty of useful tips. This book is the real deal!

Did you like this interview? Make sure to check out these other Brazilian recipes that I cooked on The Foreign Fork!: 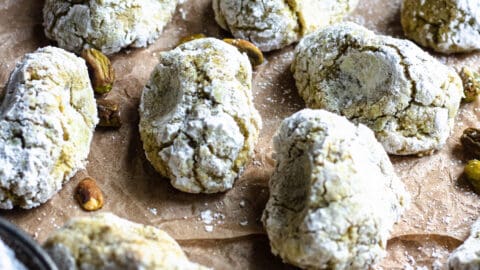 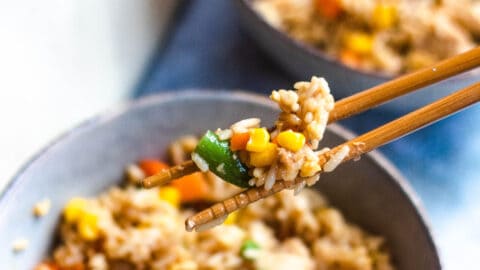 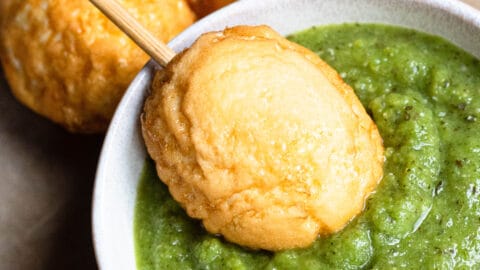 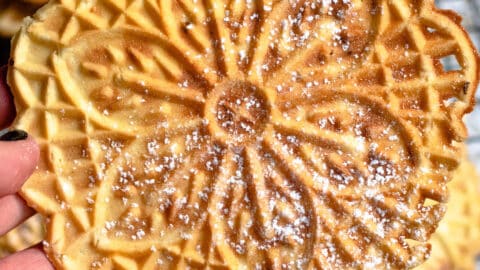 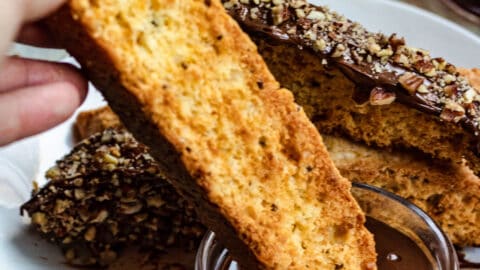 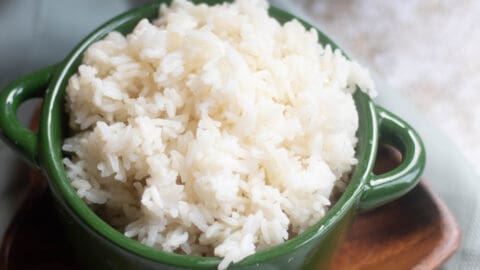 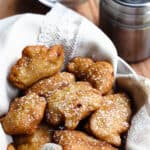