This bouranee baunjaun (eggplant with yogurt sauce) dish was absolutely delicious. Eggplants are fried in hot vegetable oil and then combined with peppers, tomatoes, onions, and a garlicky yogurt sauce to create a smooth, scrumptious side dish. The eggplants are pre-cooked, but the tomatoes and peppers are not, leaving the dish with a great and dynamic texture (instead of one big pile of mush). Use Afghan naan bread to scoop up these veggies or just eat them with a fork!

To be honest with you all, aside from some waffles I made about a month ago, I cannot remember the last time I’ve cooked with vegetable oil. I’ve recently been experimenting with new types of oils (like coconut, sesame, and avocado), and I use olive oil on pretty much a twice-daily basis. But vegetable oil? That’s been sitting in the back of my pantry for quite some time.

I’m not sure why… I think vegetable oil scares me a little. I’ve been trying to make healthier food decisions, so the other oils typically fall into that category far before vegetable oil does. But this eggplant dish uses vegetable oil, and it uses a lot of it. So it’s time to dust off that bottle of veggie oil and see what magic it can bring.

The first step to making this bouranee baunjaun is vital, so don’t forget it! Eggplants retain a lot of water, so if you salt and rest your slices before cooking, the water will be extracted from the eggplant and will sit on top of the vegetable for you to wipe away easily. If you forget this step, the water will come out when you fry your eggplant. Your dish will be watery and the eggplants will sizzle quite a bit when hitting the hot oil. The recipe says to salt the eggplant for 30 minutes. I salted mine for about an hour and a half, and quite a bit of water came out of them.

How do you fry… eggplant?

After salting the eggplant, use a paper towel to remove the excess water. Now it’s time to fry up those slices! Heat up a skillet with about ½ inch of oil. The oil is at the right temperature to begin frying when you stick a wooden chopstick into the oil and bubbles form around it. Drop your slices into the oil and cook until they become brown on each side.

If you cook your eggplant like this, they are going to absorb A LOT of oil. Afghans really like a lot of oil in their cooking, so frying the eggplant in ½ inch of oil is the authentic way to cook this bouranee baunjaun. This is how I chose to do it, but the amount of oil that was seeping out of the cooked eggplant started to make me nervous. In order to get rid of as much oil as possible, I lined a cookie sheet with paper towels. I left each eggplant slice to dry on there for about 15 minutes. Once they had cooled a bit, I used another layer of paper towel to press down on the slices. This helped a lot by removing a lot of the excess oil from the eggplant!

If you want your bouranee baunjaun to be less oily than in Afghanistan, you have a few options.

Even though the amount of oil in the dish was out of my comfort zone, the vegetables ended up tasting way better than I had expected they would. The veggies were tender but not too soft, and the leftover oil mixed with the yogurt sauce was to die for. In fact, the veggies were one of the favorite dishes on the table!

If you try making this eggplant dish, let me know how it goes– ESPECIALLY if you soak your slices in milk. I’m curious about the results of that one, so don’t forget to share how it went in the comments below! 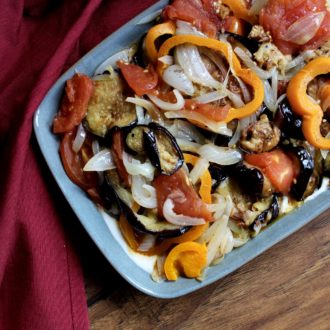 Recipe from The Complete Middle Eastern Cookbook by Tess Mallos.