Home » Interviews with Locals » Scottish Food: Everything You Need to Know 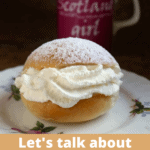 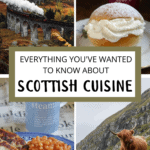 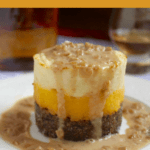 In my backpacking trip across Europe, I visited quite a few countries. I had originally intended for the United Kingdom to be on my list of locations to visit (Scottish food was calling me), but, unfortunately, never got around to it.

These days, the UK is high on my travel list, especially Scotland… and even more so after reading this interview! It turns out, there’s so much about Scotland that I didn’t know!

Thank you so much for Christina from Christina’s Cucina for teaching me all about Scotland… and how to properly spell “whisky” in the country ;). Christina was born in Scotland to Italian parents, and lived in the country for most of her childhood!

These days she lives in California, but she still celebrates the country of her birth frequently on her food blog. It was exciting to read Christina’s answers about Scotland, and hearing about her father’s fish and chips shop has my tummy rumbling. I hope you enjoy the interview as well!

Tell me about your background with Scotland

I went to school in Scotland in the early 70s and attended a Catholic school around the corner from my house. I remember walking to and from school by myself because it was so close.

On Saturday morning, we would watch cartoons and children’s shows like The Magic Roundabout and Camberwick Green. We’d go for “runs” in the car at the weekend to Loch Lomond and have picnics, which I absolutely loved.

Dad has many stories of the things that happened in his chip shop, and he sometimes had to break up fights or tell the guys to take it down the street!

The fish and chips were absolutely the best I’ve ever had because the fish came in directly from fishermen in the North Sea. Fresh haddock is such a mild and flaky fish that I bet it would convert MANY fish haters!

Dad dipped it in a light batter and my favorite was a “special fish” which was then dipped in a fine breadcrumb-like coating and deep fried in tallow. AH-mazing!

I know that Single-Malt Whiskey (or Scotch) is a big deal in Scotland! Can you tell me about the Whiskey culture in the country? Do you have a favorite one?

Absolutely, but the first thing I must tell you is that Scotch whisky is never spelled with an “e.” 🙂  I have visited two distilleries in Scotland and would happily visit many more.

Whisky is Scotland. It’s the liquid embodiment of Scotland’s culture and pride. I can’t imagine Scotland without whisky! I don’t have a favorite whisky, but definitely prefer something that is not smoky.

What is Haggis? I know that it’s a popular Scottish food but it is banned in the United States! Do you like it? How do you eat it?

Haggis is basically a type of offal dish which is often served in a sheep’s stomach, especially for Burns Night which is a dinner held for Robert Burns’ birthday at the end of January. He’s Scotland’s national poet, if you didn’t know.

It can be eaten for breakfast (as part of a full Scottish breakfast), or lunch or dinner. It’s often served with Scottish turnips (rutabagas to those of us in the US) and potatoes.

In fact, I have a recipe for a haggis stack which is served with a whisky sauce, and yes, I do like haggis! However, black pudding (made from blood) is my very favorite!

Tell me about Scottish Food. What types of meat are common to eat? What vegetables?

Scots love beef and lamb, and although pork and chicken are now eaten frequently, they’re not the more typical meats that would be found in old Scottish cookbooks. Game is popular as well as local seafood.

For vegetables I would list: potatoes, leeks, turnips (rutabaga), and onions.

What are your everyday Scottish foods? What types of things are common for breakfasts, dinners, snacks?

As with most countries, I think the Scottish food culture has changed a lot since I was a little girl. There are more influences from abroad, and many Scots are now vegetarian and vegan, which was unheard of many years ago.

Porridge for breakfast is still popular, although the traditional way of making it with water and salt and serving it savory is not as popular.

Lunch can be really anything from soup, a sandwich or sausage roll to a full meal which could also be served for dinner. Steak pie, fish and chips, Scotch pie and beans, and dessert (pudding) could be a meringue with cream, apple turnover, or maybe even Cranachan (did you catch Sam Heughan making my recipe on GMA two weeks ago?!)

Is there anything eaten in Scotland that’s not eaten anywhere else in the world? Anything surprising?

I think haggis is probably the most prominent dish that I can think of, however, I would bet there’s another country that probably makes something similar.

What’s your very favorite recipe from Scotland? What is your least favorite food that is traditionally Scottish?

Choosing my favorite recipe from Scotland is like asking me to choose my favorite child! I can’t do it.

I love (and miss) so many foods from my homeland. Here are a few: Scotch pies, black pudding, fish and chips, anything made with rhubarb, strawberry tarts and cream buns!

The least favorite is much easier, as I have never liked tablet, even as a little girl, and that’s a very Scottish candy. It’s just so cloyingly sweet, I don’t like it.

Are there any ingredients that you love that just aren’t the same unless you’re in Scotland?

Many, yes! Number one would be the fresh haddock; it’s impossible to even buy here in California. Rhubarb, raspberries, strawberries, oh, I could go on and on!

I started it on accident! Two friends had suggested I start a food blog and told me to google how to do it, and later that night, I got a message that said, “Your site is live.” and I almost fell off my chair! That was almost 9 years ago and I’m still learning as I go.

The goal of my site is to encourage people to get into the kitchen and COOK. It’s not difficult to make really tasty food with minimal ingredients and time; the important part is using the best quality ingredients as that is what makes all the difference in the world.

Although I was born in Scotland, my parents are Italian (although my dad was also born in Scotland!). So I focus on Scottish/British and Italian recipes, and hope to encourage anyone who pops on to try one of my recipes. I think if they try one, they’ll be back for more! This is my post with a few Scottish recipes for a great taste of both sweet and savory! I hope your readers enjoy them!

Did you like reading this interview with Christina? If so, you may like these other food interviews that are  featured on my site: