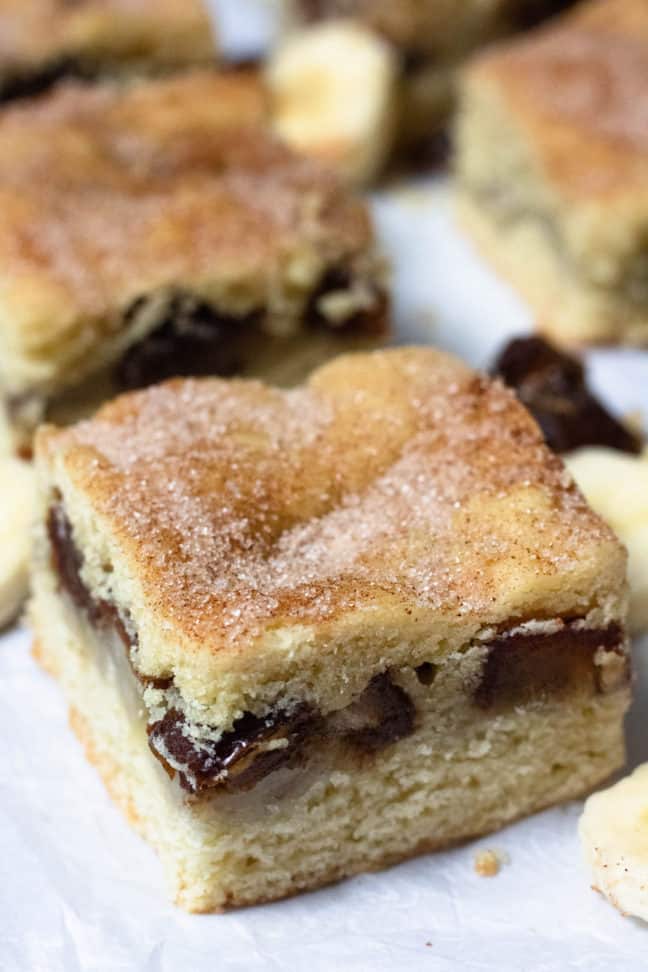 Snickerdoodle Cookie Bars with Banana Filling are inspired by a few recipes I found online credited to the country Burundi. The batter is a snickerdoodle cookie dough batter, which is placed in a baking pan with layers of bananas and dates in between. The entire dessert is then sprinkled with butter, cinnamon, and sugar to create a rich and delicious dessert for anyone to enjoy!

The Tastemaker Conference in Portland, Oregon

Well, the time has come and passed. I’m sitting on my flight on the way home from Portland, Oregon right now. Which means that I just spent the week/weekend at the Tastemaker Conference here!

This conference was pretty much everything I could dream of. I  took incredible classes from absolute experts in my field, and got to ask questions that I have literally wondered the answers to since the day I hit publish on my first blog post.  My to do list of things to do to improve The Foreign Fork has grown x100, and, while I’m sad to be going home, I’m chomping at the bit to get started on all of the new things I’m excited to do.

Above all else, the best part of this conference was BY FAR meeting so many fellow food bloggers. Sometimes being a food blogger can be a little bit isolating… I mean, there aren’t many people in the world that care to talk about how to make a pot roast look good in a photo or how to word your article just right so that your Snickerdoodle Cookie Bars with Banana Filling show up first in Google’s search index.

But, luckily for me, this conference gave me so many connections I would never have had otherwise. Karli from Cooking with Karli, Alli from Longbourn Farm, Rebecca from Good Things Baking Co, and Terryn from Hot Pan Kitchen were the BEST roommates I could have asked for.

Not only did we have fun blogging, we became actual, genuine friends. We had just as much fun exploring the rose garden of Portland (and eating literally every morsel of food that existed in Portland) as we did working silently side by side with each other. And this list doesn’t even include so many of the other incredible women and men that I met!

We shared tips and tricks, formed bonds with each other, and were genuinely sad when we had to leave…. But now I know that I have friends from around the country that have the same interests as myself.

Okay, Now Let’s Get to the Snickerdoodle Cookie Bars with Banana Filling

So, Burundi was a tough one for me. There’s not much research done on the country of Burundi, and definitely not a lot of recipes or food posted…. I saw Snickerdoodle Cookie Bars with Banana filling from Burundi (also called Date and Banana Mix) on the internet a few times, BUT I will preface this by saying this:

Burundi is not known for having a lot of dessert. Quite frankly, I tried my hardest to find someone from Burundi so that I could ask them for help picking recipes (or confirming that the recipes I had picked were, in fact, Burundian), but to no avail. Electronic resources, book resources, finding people… none of them were super helpful to me about specific dishes from Burundi.

But whenever I saw these cookie bars they looked awesome. So, for the very first time I will tell you point blank: I’m not sure if these Snickerdoodle Cookie Bars with Banana Filling are truly from Burundi, but…. They’re delicious…. so I made them anyways.

Dates are the fruit that grows on a date palm tree. These trees typically grow in tropical regions, and when the fruit is fresh, it has a smooth skin. Most of the time, when dates are sold in America, they are dried.

Drying the dates makes them sweet and full of fiber and anti-oxidants. Honestly, I don’t really know what an anti-oxidant is, but I know that eating a date is yummy and it taste like dessert. Which is why they’re in these cookie bars!

How to Layer Your Snickerdoodle Cookie Bars with Banana Filling

Once you make the dough for the Snickerdoodle Cookie Bars with Banana Filling, you’re going to layer them in the pan. First, place down a small layer of dough… JUST enough to cover the bottom of the pan with a tin layer. Then add the dates and bananas over the top of this cookie mixture.

The Secret Ingredient for Snickerdoodle Cookie Bars with Banana Filling

The very best part of these Snickerdoodle Cookie Bars is the cinnamon sugar topping on the bars <3. To really send these cookie bars over the edge, make sure to brush melted butter over the pan before sprinkling the cinnamon sugar. Oh boy, I can already feel myself melting into the goodness.

Did you like these Snickerdoodle Cookie Bars with Banana Filling? Then make sure to also check out my recipe for Alfajores from Argentina, these Tahini Cookies from Armenia, and ESPECIALLY these Maamoul Cookies with Date Filling from Bahrain. And if you made this recipe, don’t forget to take a photo and share on Facebook or Instagram with the hashtag #TheForeignFork and tag @TheForeignFork. Thanks for stopping by, everyone! I’ll see you all very soon. 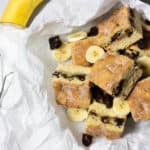 Snickerdoodle Cookie Bars with Banana Filling are inspired by
a few recipes I found online credited to the country Burundi. The batter is a
snickerdoodle cookie dough batter, which is placed in a baking pan with layers
of bananas and dates in between. The entire dessert is then sprinkled with
butter, cinnamon, and sugar to create a rich and delicious dessert for anyone
to enjoy!

Recipe inspired by 196 Flavors, though the measurements are different. 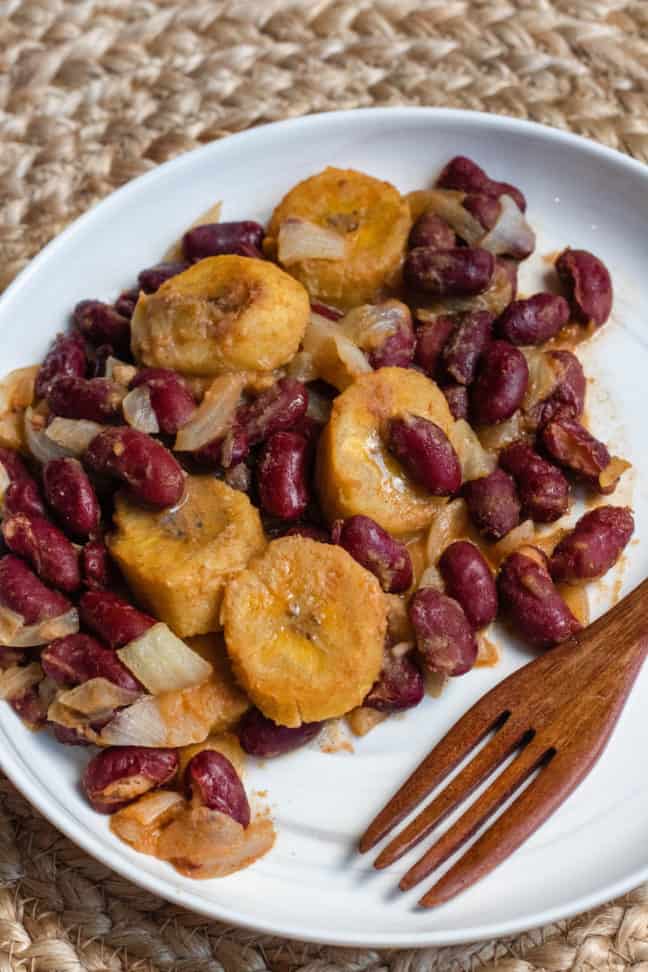 Red Beans and Plantains is a 30-minute recipe from Burundi made with… you guessed it, red beans and plantains! It is flavored with cinnamon and cumin to give it a toasty, homey flavor. It then simmers on the stove to soften the plantains and allow the flavors to combine. SO GOOD!

Well everybody, I’m off. I’m sitting on an airplane on my way to the Tastemaker Conference right now!!! Okay, this has nothing to do with Red Beans and Plantains (if you want info about that, scroll down a few paragraphs), but I want to recap the little 12:20 am rant I had on instagram a few days ago. Sorry for those of you that have already heard this, but I’m talking about it again because it’s IMPORTANT.

Headed to the Tastemaker Conference

Okay SO, about 6 months ago, I signed up for the Tastemaker Conference in Portland, Oregon. It’s a food blogger conference that brings together food bloggers from around the country and allows for networking, breakout sessions, etc. etc. etc. You know… normal conference things.

I wasn’t sure if I should go… The conference was halfway across the country, I had to pay for flights, it was on the weekend of my birthday, blah, blah, blah. Long story short, I pulled trig and bought the tickets. WOOHOO!!!

But no, at the time it was not woohoo. At the time it was “what the f*@k am I doing?” I had been a food blogger for about 6 months when I had bought the tickets, and I hadn’t made a SINGLE dollar off of my blog. Every day I was waking up at 4am and going to bed at midnight to work on the blog around work, but I felt like a phony. I felt like I was going to be around people that were making a living at this, and I was just some lame hobbyist that was going to show up..

(All of this was DUMB to think btw. Just because I wasn’t making money yet didn’t mean I was a phony. In fact, it probably meant I was a more dedicated food blogger than most lol.)

I made it my goal to make ONE dollar by the time I went to Portland. I didn’t know how I was going to do it, but I told myself that I would make one single dollar before I left. A few months before, it still hadn’t happened, and I started to worry.

But alas, I leave tomorrow, with more than one dollar from my blog in my pocket. How did I make it happen? I set it as a GOAL. I told myself that I wanted to make something happen, so I did. I worked at it like it was GOING to happen, so that way, when all was said and done, it did. Not just because I said it. But because, once I said it, I worked my booty off for it.

Once I set my mind to something, there’s no way I’m not going to achieve it. And this is not from something magical in the air that says, “once you make a goal, *POOF!* the fairies will make it come true”. No, this is because once I set a goal, I work at it until it’s achieved, even if it feels like something that is so far away, I’ll never get there.

So, my friends. The point of this post is just to tell you that you can do it. Whatever it is you want to achieve, you can do it! Set it as a goal, work at it like it’s already going to happen, and you will get there. YOU CAN DO IT. And don’t let you tell yourself that you can’t.

Okay, Let’s Get On to the Red Beans and Plantains

So as we learned in my introduction to Burundi, meat accounts for only about 2% of the average diet in this country. Farming is the main job across the country, but raising livestock is not a strong suit amongst the Burundis. Instead, the people of Burundi have to get whatever protein they can from plant-based meals. Which why we’re making Red Beans and Plantains today!

I cooked Burkina Faso and Burundi in one weekend, and I must admit… this was my favorite dish of them all. Don’t get me wrong, the other ones were good. But there was just something about this recipe– the delicious, homey flavor of cinnamon mixed with cumin– that made my mouth turn up into an immediate smile when I ate this dish!

Don’t let the word “plantains” scare you in this recipe. If you’ve ever been in the bananas section in your local grocery store, you’ll know that plantains are actually quite easy to find! Plantains look like a banana, but taste more like a potato. They are very starchy and tough, and can’t really be enjoyed without cooking. Stewing the plantains in chicken stock softens them up and FILLS them with flavor. Oh god, I’m drooling just thinking about it.

The best thing about this recipe is just that you need to put all of the ingredients in a pan at once, simmer for 25 minutes, and call it a day. How easy is that? I’ll answer that for you: MEGA easy.

If you liked this recipe, make sure to leave a comment letting me know! Don’t forget, too, to post a picture on instagram and facebook with the hashtag #TheForeignFork and tag @TheForeignFork. If you liked this recipe, you might also like my recipe for Plantain Chips from The Bahamas or this recipe for Red Beans and Coconut Rice from Belize. Thanks for stopping by, everyone! I will see you next week for a great dessert recipe from Burundi. 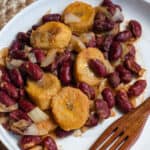 Red Beans and Plantains is a 30-minute recipe from Burundi made with… you guessed it, red beans and plantains! It is flavored with cinnamon and cumin to give it a toasty, homey flavor. It then simmers on the stove to soften the plantains and allow the flavors to combine. SO GOOD!