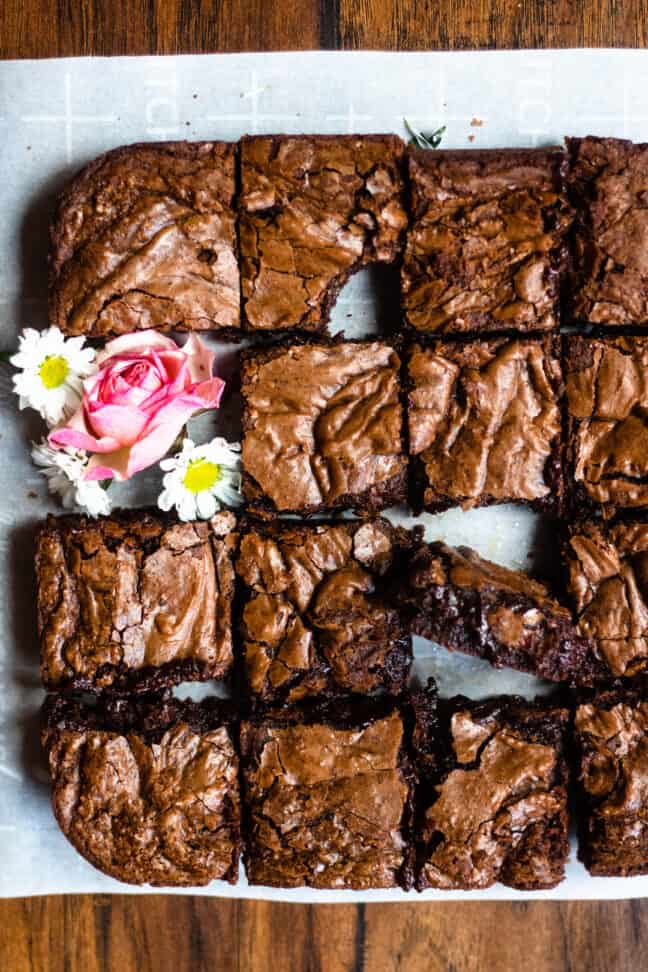 This Fudgy Brownie Recipe is the ultimate brownie recipe for chocolate lovers! If you want chewy, fudgy, and ultimately chocolatey, you’ve come to the right place!

As a food blogger, it’s hard to know when to make a recipe. There are so many brownie recipes in the world…. Does the internet really need another one? But, I love to bake. And I want you to know that if you come to the Foreign Fork, you’re going to be able to find anything you need. So… Here’s my Fudgy Brownie Recipe!

This recipe is absolutely scrumptious, and yes, the internet DID need it. The brown sugar in the recipe makes for the ULTIMATE chewy, fudgy, chocolatey brownie. If you want chocolate overload, this brownie recipe is the way to go.

You can throw this recipe together in 10 minutes… it’s so easy! Make this at home and tell me what you think in the comments below. I hope you love it as much as I do!

What Makes a Brownie Fudgy?

A brownie is normally fudgy primarily because of its ingredients.

The amount of sugar in any brownie recipe stays the same. The more “fat” is in the recipe, the fudgier the brownies will be. “Fatty” ingredients include butter, melted chocolate, or vegetable oil.

Cakey brownies get their texture from less “fatty” ingredients and more flour. The more flour, the lighter the end result will be. Cakey brownies also rely on leavening agents like baking powder to help the brownie rise even more.

In my original testing of this recipe, I added in 2 tbsp of vegetable oil. The brownies were delicious and so flippin fudgy. I had to tweak the recipe a bit though, because the oil was too much and the brownies were super oily to the touch.

I removed the oil when testing this batch. It was a good choice for the eating experience, and the brownies taste delicious! But know that if you want an EVEN FUDGIER (albeit very oily) brownie, you can add in 2 tbsp of vegetable oil when you’re mixing in the eggs and vanilla.

What Ingredients Are in This Fudgy Brownie Recipe?

How Do you Make this Fudgy Brownie Recipe from Scratch?

Preheat your oven to 350 degrees Fahrenheit.

Put the melted butter in a bowl with the granulated sugar and the brown sugar. Use an electric hand mixer to combine.

Add the eggs and vanilla and mix to combine.

Put your chocolate chips in a microwave-safe bowl. Microwave in 20 second increments, mixing between each round. Microwave until fully melted, normally 3-4 rounds in total.

Add the melted chocolate into the butter/sugar combination. Use a rubber spatula to combine.

Sift in flour, cocoa powder, and salt. Use your rubber spatula to mix until combined.

Cook for about 45 minutes depending on desired doneness. Your brownies are done when a toothpick inserted in the middle comes out clean.

How Do You Know When Fudgy Brownies Are Done?

If you like your brownies SUPER fudgy and don’t want the toothpick to come out clean, make sure that they edges are set. Then jiggle the brownie pan.

If the batter jiggles, your brownies are not cooked enough. If the brownie doesn’t jiggle but a toothpick still comes out with chocolate on it, you will have very fudgy brownies.

What Does the Brown Sugar Do to the Brownies?

Most brownies using white sugar or a bit lighter. Adding brown sugar increases the density of the end product, which also means that it is far chewier than most.

When the brown sugar heats in the oven, it also gives off a caramel-y or molasses-y taste! I love this taste in my brownies.

If you want a less chewy fudgy brownie recipe, you can replace the brown sugar with all white granulated sugar.

How Should the Brownie Batter Look?

If you’ve ever made boxed brownies before, you should know: the batter of these brownies is very different than the batter that you’ve had in the past.

The boxed brownies have a more runny batter. It’s thin and a little watery.

In contrast, this brownie batter is thick. It’s texture is a happy medium between cake batter and cookie dough. Very thick, but still scoopable and pourable. Pouring it into the baking pan might be a little difficult, and you might need some help from a rubber spatula.

This thick batter consistency comes primarily from the brown sugar as well as the melted chocolate. There isn’t a lot of extra liquid in this recipe, so it’s generally very thick.

Can I Add Chocolate Chips to these Brownies?

Absolutely! I don’t normally like chocolate chips in my brownies. I want my fudgy brownie recipe to be just that… thick and fudgy and chewy and gooey. I don’t want to have to worry about biting into something hard. That’s why this recipe has no chocolate chips!

You can then use your rubber spatula to mix the chocolate chips in. Pour it in the pan and bake accordingly!

If you liked this recipe, you’ll also love these recipes I’ve picked out just for you!