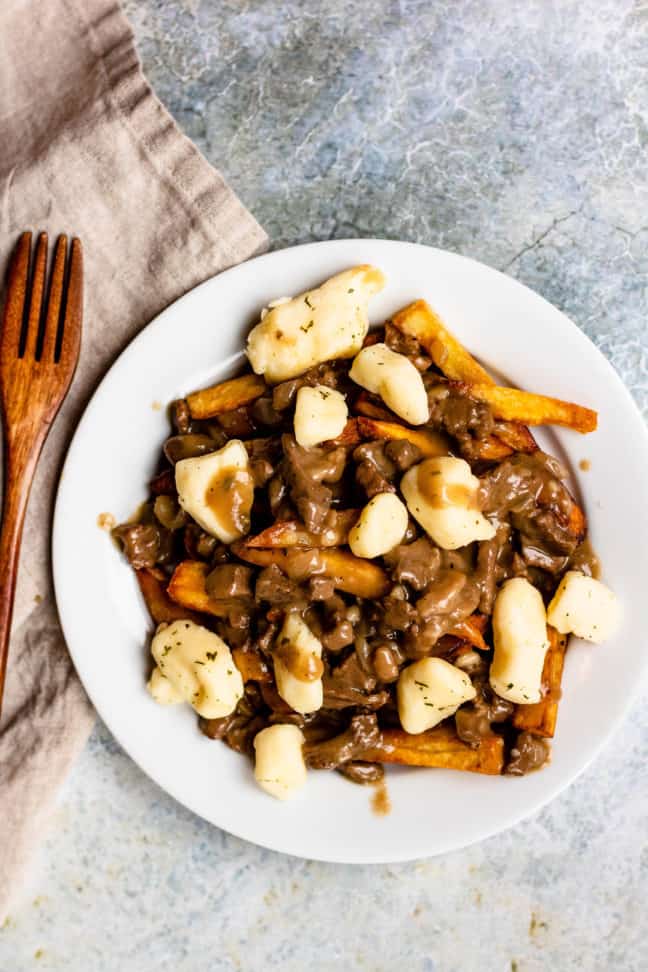 Ah, Canadian Poutine. The Canadians’ most delightful invention for the perfect, stumbling-home-from-the-bar-need-a-greasy-snack treat. Poutine features crunchy french fries soaked in brown gravy and then topped with cheese curds. Can you imagine anything more perfect?

What first began as a menu item on one restaurant’s offerings near Drummondville, Quebec in the 1950s has quickly become a staple across Canadian cuisine.

I don’t know about you, but as someone that lives in the United States (and VERY close to Canada), I know a little bit about Poutine. At least Michigan– and I suspect most states in the USA– is no stranger to Canadian Poutine being on the bar appetizer menu.

Where Was Poutine Invented? What Does Poutine Mean?

There is much debate over the true origins of Poutine? Was Poutine invented in 1957 at L’Idéal in Warwick, Quebec? One customer in a rush asked the restaurant to throw each of his separate menu items– cheese curds and fries– together in the same to go bag. When he opened the bag and peered inside, the customer allegedly exclaimed that his to go order was “poutine!” meaning “a mess”.

Perhaps, instead, poutine can be credited to Jean-Paul Roy, the owner of the restaurant Le Roy Jucep. Roy noticed that his customers would often combine the french fries, gravy and cheese curds that he sold separately into one large meal. Eventually, he put the combination on his menu…. And later patented the idea.

When did Poutine Become Popular in Canada?

Poutine became popular in Canada shortly after its invention, but for quite some time, the dish wasn’t called “poutine”. The mixture of fries with cheese curds was called “mixte” for quite some time. Once larger restaurant chains started selling the dish, its name transformed.

Now, poutine has become so popular in Canada that it is the country’s national dish. McDonalds and Burger King even sell their own versions of the infamous Canadian treat.

Different regions of Canada feature their own versions of Canadian poutine. For example, Newfoundland will also serve a dish called “poutine”, but instead of cheese curds, the dish will feature “dressing” or “stuffing”.

Are Canadian Poutine and Disco Fries the Same?

At first glance, it seems to be so. In fact, Disco Fries are New Jersey’s answer to the infamous Canadian poutine. However, there is one glaring difference between the two:

You know what? That doesn’t sound the same to me at all 😉

Seriously, though, Canadians take their cheese curds seriously, and for good reason! A poutine without cheese curds is not a poutine at all.

Cheese Curds for Your Canadian Poutine

One of the most important tips that I received from my Canadian friends about making Canadian poutine is to look for high quality cheese curds. Your curds should squeak when you bite into them! If they don’t they’re not high quality enough curds.

Don’t judge me, but my curds didn’t squeak….. Oops…

What is Poutine Gravy Made Of?

What Else Do I Need to Make Poutine?

For full measurements and instructions, see the recipe card below.

How to Make Canadian Poutine

Follow my recipe for how to make the BEST crunchy fries (inspired by Belgium).

Add butter. Reduce heat to medium and stir until it melts.

Add flour for roux and whisk. Let sit for 3 minutes.

Cook for 15-20 minutes uncovered, depending on the consistency you’d like your gravy to reach

Top fries with gravy and cheese curds and enjoy 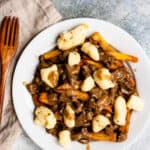 Recipe copyright The Foreign Fork. For educational and personal use only. 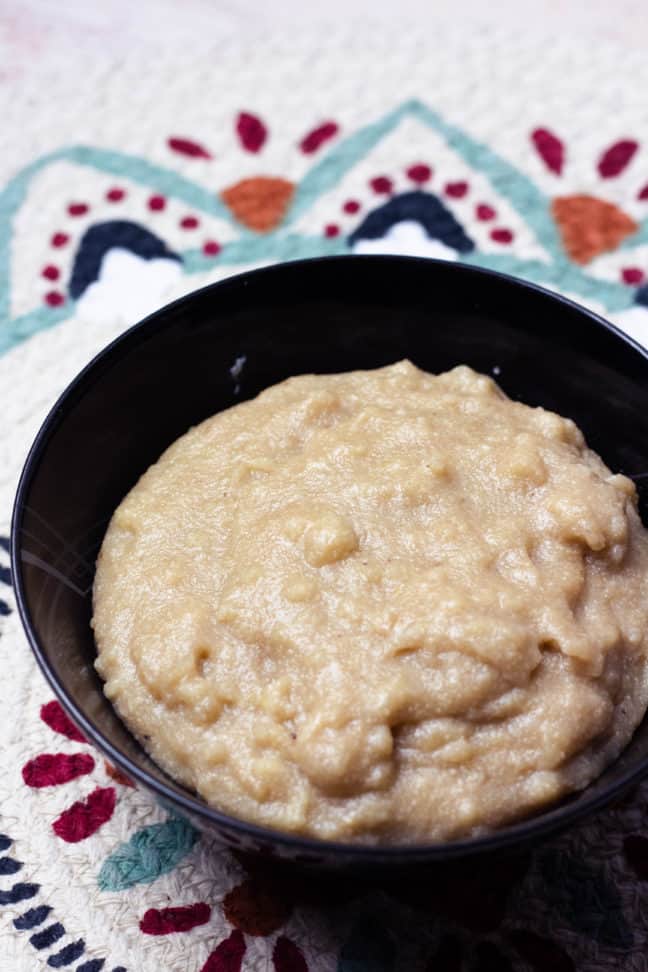 Pap is a staple in Botswana. It is made from cornmeal and beef broth and is a base at most meals. Read on to find out how to make this authentic Batswana recipe!

One of my favorite memories from the blog so far has been the Angola cookoff that I had with Mama Foreign Fork. Do you remember? If you’ve stuck around for long enough to know what I’m talking about… thank you and I love you.

Basically, Mama Foreign Fork and I made Funje from Angola, which is a staple dish from the country. Funje a mixture of cassava flour and water, and acts as a base for quite a few Angolan meals. Funje wasn’t my favorite dish on the planet, but the experience of cooking it was fun… and now I’m back for more.

Botswana has a dish very similar to funje called Pap. Instead of being made out of cassava flour and water, though, Pap is made by mixing cornmeal and beef broth. Everything else about the dish is the same.

Pap, also known as mieliepap, is a staple in Botswana. It acts as the base for many dishes because it’s inexpensive and filling. In fact, cornmeal (or maize meal) is so inexpensive in Botswana that it’s common to mix Pap with vegetables. This makes the dish heartier and adds more nutrients to it. The Batswana also add butter and sugar to their Pap in the morning and eat it as a kind of porridge to start their day.

This dish is best served as a base for another classic Batswana dish, Seswaa. Click here for a link to a great Seswaa recipe.

Did you have a fun time trying to make this dish? Did you love trying something authentic from another country? Be sure to check out this recipe for funje from Angola or this Pispili from Albania. If you’ve challenged yourself to your own culinary adventure, be sure to let me see photos on Facebook or Instagram by tagging @TheForeignFork and hashtagging #TheForeignFork. Thanks for stopping by! 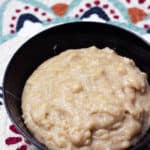 Pap is a staple in Botswana. It is made from cornmeal and beef broth and is a base at most meals. Read on to find out how to make this authentic Batswana recipe!