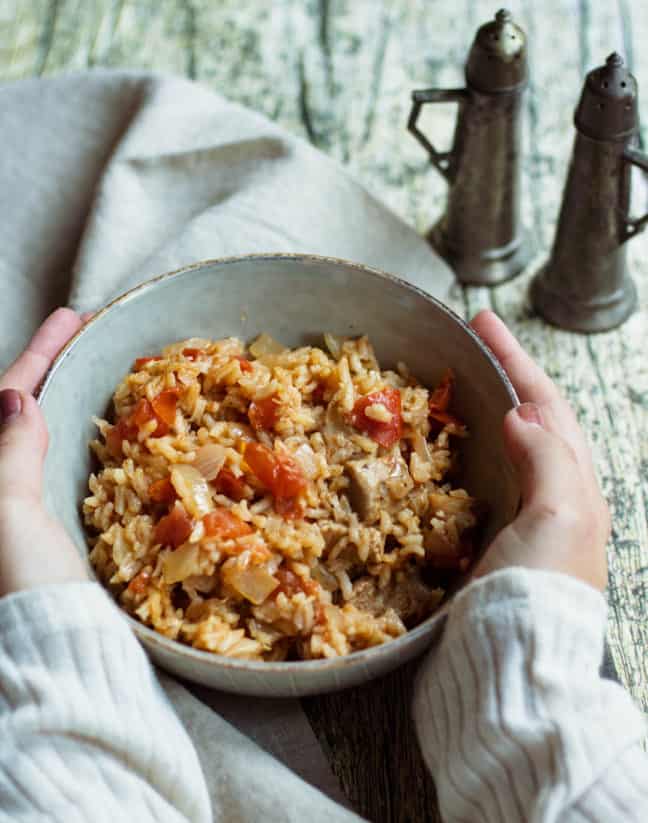 This Tuna with Rice recipe, also known as Arroz con Atum, comes from the nation of Cabo Verde. Cachupa is the most popular dish in Cabo Verde, but this Tuna with Rice dish is a close second. The rice is so flavorful and delicious, and the tuna steak is a perfect form of protein in this meal! Keep reading for the recipe.

On the weekend I tested this recipe, my family and I were up north in Hillman, Michigan where we have a cabin the middle of literal NOWHERE. No really. You drive through three miles of one-track road before getting to the gate that leads into our property. There’s not phone service or wifi or even a grocery store within 45 minutes to pick up a freaking forgotten tomato (ahem, I forgot my tomatoes and couldn’t make the other meal that I had planned. I’m not bitter. Only a little.)

We spent Saturday morning/early afternoon at the Posen Potato Festival, a tradition that my family has been attending since I was a little kid. After that, I helped my dad run the tractor for a few hours, turning over his planting fields to leave room for the winter wheat he’s planting. I’m sure ya’ll didn’t guess I had a country side to me, huh?

Tuna and Rice is the Perfect Quick Recipe

Anyways, after a full day out and about, and the fact that I was then covered in dirt and it was already 7:30, I had little motivation for cooking dinner. Luckily, this Rice with Tuna (Arroz con Atum) recipe was perfect for this instance. It only took from 7:30 to 8:00 for my dinner to be fully prepared, cooked, and on the table. That’s a win in my book!

This dish is normally made with canned tuna. I watched a few YouTube videos before deciding to make this dish myself, and I heard that if you didn’t pick the highest quality canned tuna, the dish wouldn’t be as delicious as it could be.

My trip to Kroger left me nervous that I wasn’t choosing the best tuna… instead, I walked over to the fish counter and ordered tuna steaks instead. If the locals were telling me that I needed high quality tuna, high quality tuna is what I was going to buy. This was definitely the best way to present the tuna in this dish!

Adding Tuna to your Tuna and Rice

Tuna is, of course, popular in Cabo Verde because Cabo Verde is an island nation with an abundance of tuna. If you don’t like tuna, you could also make this dish with chicken. However, I only ate tuna once before, so I didn’t think I liked tuna muchmyself. After trying this dish, I’d recommend making it at least once with tuna to try it… I think you’ll like it!

Cooking your Tuna and Rice

Take care in cooking your tuna in this dish. If tuna is overcooked, it becomes tough and chalky. Tuna typically takes about ten minutes to cook through, so make sure to wait the five minutes before adding the tuna into the rice dish. This way, the rice and the tuna will complete cooking at the same time. 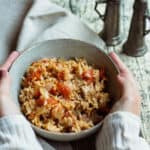 This Tuna with Rice recipe, also known as Arroz con Atum, comes from the nation of Cabo Verde. Cachupa is the most popular dish in Cabo Verde, but this Tuna with Rice dish is a close second. The rice is so flavorful and delicious, and the tuna steak is a perfect form of protein in this meal! 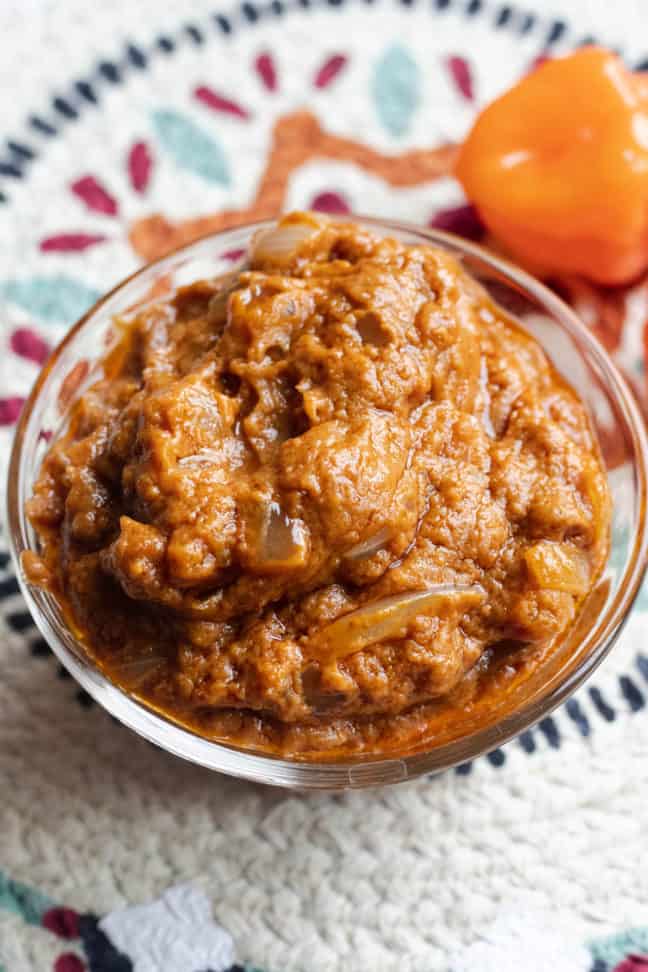 This Spicy Peanut Sauce from Benin is a delicious staple in Benin’s African cuisine. It can be enjoyed on meat, rice, potatoes, or vegetables, and is a great choice for spicing up any meal!

Have you ever eaten peanut butter right out of the jar with a spoon? Of course you have. Because it ROCKS. Peanut butter is the ultimate food. As you might remember from my Belizean Banana Cake with Cream Cheese Frosting recipe, I eat a banana every day. What I didn’t mention in that blog post is that that banana is ALWAYS accompanied by peanut butter. Peanut butter is a food I turn to quite often. There’s no other way to describe it than this: it just makes me happy.

Controlling the Spiciness of Your Sauce

This Spicy Peanut Butter sauce is made with a blended onion base and a hearty helping of habanero pepper. Depending on your spiciness preference, you can range you habanero portion from “no addition” to “alllll the spiciness.”

I, of course, went for a very mild spice. I put about one half of a habanero pepper in my Spicy Peanut Sauce. If you’d like your sauce to be spicier, feel free to add a full habanero, or maybe even two. The spicier to Spicy Peanut Sauce, the more traditionally Beninese it is.

How to Enjoy this Spicy Peanut Sauce

In Benin, they enjoy this Spicy Peanut Sauce on… almost everything. Rice, vegetables, potatoes, meat (when they eat it). It’s been said that this sauce is the Beninese form of ketchup… it goes on everything! My favorite way to serve the sauce was to roast some sweet potatoes and use this as a topping. Try whatever fits your fancy!

Did you like this recipe? If so, try out my recipes for Belgian Fries with Andalouse Sauce or my Chimichurri Sauce from Argentina. If you liked this recipe, leave a comment below! Please also feel free to take a photo and post it on Instagram and Facebook with the hashtag #TheForeignFork and tag @TheForeignFork. Thanks for stopping by everyone! 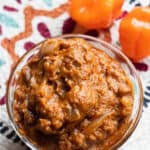 This Spicy Peanut Sauce from Benin is a delicious staple in Benin’s African cuisine. It can be enjoyed on meat, rice, potatoes, or vegetables, and is a great choice for spicing up any meal!